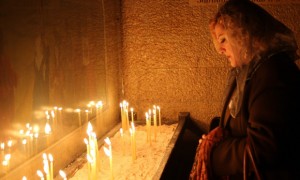 They’re called Saturday Mothers. Every Saturday for twenty years, women have been standing on the street, in Galatasaray or in another Turkish square. They hold up pictures of their sons. Or their husbands. They are officially counted as missing; in reality, they were murdered for political reasons.

“The mothers’ tenacity in witnessing to this is the strongest form of resistance,” says Işın Önol. The artist comes from Istanbul and has lived in Vienna for five years. Here she has organized a powerful exhibition about forms of female, and sometimes publically celebrated, memory. “Mobilizing Memory” will be on display through Friday and could hardly leave the viewer cold. The piece by Argentinian-born Silvina Der-Meguerditchian was developed specifically for the Vienna show and especially is noteworthy, just weeks before the memorial day marking the deportation of Armenian intellectuals from Istanbul 100 years ago, the beginning of the murder of hundreds of thousands of Armenians. Armenian descendants of survivors living in Vienna knitted together their old family photos—literally, with wool—into a kind of Anatolian carpet. On the white screen that comprises the back side of the piece is a video showing the women in the midst of this collaborative memory work. The photos show families together before the camera, who were never together again after the genocide. The family of the artist also shared this fate; Silvina Der-Meguerditchian is the granddaughter of displaced Armenians.

The knitwork shows one of the unique aspects of this exhibition – it not only depicts memory, but also generated memory in its workshops. How does it affect a people with no national memory culture, like the Kurds? On akakurdistan.com, Susan Meiselas has tried for years to fill in these gaps. For “Mobilizing Memory,” she also held a workshop with women from Iran, Iraq, Syria, and Turkey. “In Vienna we continued collecting,” says Önol. Denise Sözen in turn interviewed residents of the Armenian neighborhood in Los Angeles.

The exhibit was already on display in a similar form in Istanbul, the idea of which came from a feminist research project by American and Turkish academics. “I like using the image of the unbroken camera,” says curator Işın Önol. “When political violence takes place in public spaces in Turkey, the story usually is, ‘unfortunately, the security camera was broken when it happened.’ For me, the witnesses are unbroken cameras.”

“Mobilizing Memory.” On display until Friday, April 3, in the Kunsthalle Exnergasse, Währingerstraße 59, Vienna 1090.