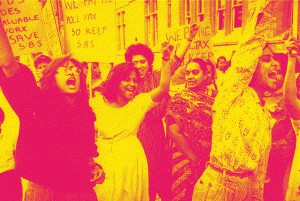 Dissent magazine’s editors and contributors are gathering Tuesday, November 22, 6:30 p.m. at The New School for an issue launch focused on the challenges feminists will face under a Trump presidency, and how feminist movements can fight back.

One contributor to the discussion is Premilla Nadasen, Associate Professor of History at Barnard College and co-director of CSSD’s working group on Social Justice After the Welfare State.

Others speaking are Dawn Foster, Ann Snitow, and Sarah Leonard. Dawn Foster is a London-based writer on politics, social affairs, and economics, and the author of Lean Out (Repeater, 2016). Ann Snitow, a co-founder of the Network of East-West Women, is a professor of Literature and was the Director of Gender Studies from 2006 to 2012 at The New School. Her most recent book is The Feminism of Uncertainty: A Gender Diary (Duke University Press, 2015). Sarah Leonard is a senior editor at the Nation and co-editor of The Future We Want: Radical Ideas for a New Century (Macmillan, 2016). She is a contributing editor to Dissent and the New Inquiry.

A flyer for the event says “A virulent misogynist is now president of the United States. He has bragged about sexually assaulting women, threatened to repeal abortion rights, and will refuse to protect transgender individuals from discrimination. His proposals to ban immigrants, reject refugees he deems “terrorists,” and cut federal climate spending will have serious consequences for everyone, especially women. And if he follows through on his promise to “bomb the shit” out of countries he deems his enemies, women abroad will suffer too.”

The event is co-sponsored by Heilbroner Center for Capitalism Studies, The New School; CSSD; and the Institute for Research on Women, Gender and Sexuality, Columbia University.