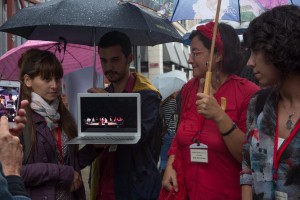 The fourth day of Women Mobilizing Memory featured a roundtable discussion moderated by Ayşe Gül Altınay on documentary films about state violence and Kurdish memory. The directors of the films Bûka Baranê (2013, dir Dilek Gökçin) and Dersim’s Lost Girls (2010, dir. Nezahat Gündoğan) also joined the discussion. Bûka Baranê focuses on the experiences of people who were students at an elementary school in Hakkari to explore the different forms of state violence and the Kurdish guerilla movement in the 1990s. In light of their memories of violence during the period of emergency rule, the film reflects on how children longed for peace.

Based on interviews with elderly women who experienced the Dersim genocide, Dersim’s Lost Girls explores how children and women have been affected by ethnic violence and assimilationist policies that targeted the Kurdish population in Dersim in the late 1930s. The discussion was followed by the roundtable Gendered Memories of War and Genocide in Turkey, moderated by Meltem Ahıska. Zeynep Türkyılmaz presented her research on the genocide in Dersim, its gendered aspects, and the tensions between memory and the archive as they relate to people’s memories of the genocide. Ayşe Gül Altınay explored Nebahat Akkoç’s organization KAMER to discuss post-nationalist feminist memory work within the broader context of Turkish politics. Hülya Adak’s presentation explored a variety of examples in late Ottoman and Turkish history to discuss how the position of “the mourning mother” has been utilized by authors and activists for different and at times conflicting political projects, especially with regard to the Armenian-Turkish relations and the memory of the genocide. Pınar Ensari discussed her research on young Kurdish women, their memories of state violence in the Southeast of Turkey in the 1990s, and their engagement with activism and politics in Turkey, with a specific focus on the Gezi Resistance and its aftermath.

After the roundtable, we joined the Gender-Memory Walking Tour co-organized by the Sabancı University Gender and Women’s Studies Forum and the Karakutu/Black Box group. That evening, we attended Disco Number 5, a solo performance by Mirza Metin in Kurdish and directed by Berfin Zenderlioğlu. The performance focused on torture at the Diyarbakır prison during the military regime in the aftermath of the coup d’état of 1980. Reflecting the transdisciplinary nature of the program, the events throughout the day demonstrated the different forms of memory work.

Rustem Ertug Altinay is a doctoral candidate in the Department of Performance Studies at New York University and a Turkish Cultural Foundation fellow.