Shirley Sun: “Should We Be Worried About Racialization of Precision Medicine?” 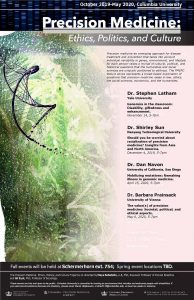 Dr. Shirley Sun, Associate Professor of Sociology with joint courtesy appointments at Lee Kong Chian School of Medicine and the School of Biological Sciences at NTU gave a presentation on December 4, 2019 hosted by the Precision Medicine: Ethics, Politics, and Culture working group on the racialization of precision medicine.  In her talk titled “Should you be worried about racialization of precision medicine? Insights from Asia and North America,” Dr. Sun gave an overview of her comparative analysis of provider perspectives on the categorization of genomics data based on race in Singapore, Canada, and the United States.

Her qualitative interviews with healthcare providers reveal the contentions and dilemmas that racialized precision medicine creates for practitioners; on the one hand providers understand that genomic data categorized by race and ethnicity is inherently faulty, and that it is at best a proxy for health behaviors.  One provider called this the “poor man’s” genetic testing. On the other hand, data is delivered to these providers in a racialized format and these providers are then tasked to utilize this data to make healthcare decisions for their patients. Data categorized along ethnic and racial lines also provide useful shorthand devices to help patients understand their disease probability.

Dr. Sun warns that racialized findings of precision medicine may be especially challenging for populations that do not have access to resources.   Inability to pay for cutting edge therapies or healthcare resources necessary to address disease disparities revealed by precision medicine may contribute to further health inequality among already vulnerable populations that are more likely to be ethnic and racial minority groups.  Concerns from providers about patient access to resources were observed in all three sites, despite that healthcare is nationalized in Canada, for example.

The presentation concluded by opening up to questions from the audience.  Among other topics, questions regarding the impact of anti-discrimination laws and the importance of provider self-identified demographics (race, ethnicity, gender) emerged.  Interestingly, according to Dr. Sun, providers first and foremost identified themselves as healthcare providers before identifying with any race or ethnicity during these interviews.  Second, the discussion also opened up to the concern about patients’ access to costly and rare therapies necessary to treat their genetic disorders. Physicians would anecdotally tell stories of patients who had succumbed to such high expenses that they sold their homes and other possessions to pay for treatments.  This personal narrative drove home how precision medicine diagnostic abilities were more advanced than treatments, as treatments were rare and prohibitively expensive across both nationalized and privatized healthcare systems.

Given the importance of race and ethnicity to health in racialized societies like the United States, we see disparate approaches to how genomics are discussed in research.  Seeing cancer morbidity and mortality differences among ethnoracial groups as a starting point, Peter O’Donnel and Eileen Dolan (2009) of the University of Chicago suggest “cancer pharmacoethnicity” may be a useful approach.  Cancer pharmacoethnicity, according to O’Donnel and Dolan, could hold the potential to be predictive of individual drug responses based on the race or ethnic group these individuals identify with.  In contrast, Nancy Krieger and colleagues (2017) of Harvard’s School of Public Health analyzed the racial disparities in estrogen-receptor negative breast cancer among Black and White American women through a socio-political lens.  In this report, Krieger’s team demonstrates that it is necessary to look at race as a historically situated category that changes through time. Krieger, Jahn and Waterman illustrate how the high incidence of estrogen-receptor-negative breast cancer among Black women compared to White women can be linked to being born under the legalized discrimination of Jim Crow laws.  Black women living in states that enforced Jim Crow segregation had a higher odds ratio of estrogen-receptor negative breast cancer, while White women did not show this trend. The highest incidence of this type of breast cancer was evident for Black women born before 1965. This historically situated approach highlights how racialized biologies result from social processes independent of fundamental biological differences.

Krieger, Jahn and Waterman validate a framework that examines racial disparities at the molecular level in a way that foregrounds history and social processes of racialization, and avoids suggesting that observed differences emerge from “fundamental” difference in racial biologies or genotypes.

Sociopolitical context is also important from a global perspective.  In Cooper et al.’s article (2005) titled “An international comparative study of blood pressure in populations of European vs. African descent,” sociocultural and political impacts on health trends were again highlighted.  While in the United States cardiovascular disease is indisputably a more prominent health problem among Blacks, Cooper and colleagues establish that this does not have to do with African Ancestry; in fact, Germanic populations had a higher high blood pressure incidence than any population included in their world-wide study.  Through their analysis, the authors bring to the foreground the effects of place and social standing to population-level health in contrast to other research that frame disease as germane to the individuals that make up racial and ethnic populations.

Troy Duster (2003) brings the discussion in focus through his description of the divergent approaches to population-level genomic disease risk.  In his comparison of responses to Tay-Sachs and sickle cell anemia genetic screening, Duster emphasizes how genomic disease risk is not simply about the disease, but also about the population it affects and the policy responses enacted.  Duster describes how Tay-Sachs is a rapid-onset generative genetic disorder that is dormant in the first year and a half of a child’s life, but ultimately claims the lives of young children before the age of four. Tay-Sachs disproportionately affected Ashkenazi Jews with 22 of 30 infants born with Tay-Sachs being Ashkenazi during the 1970s (2003: 45).  A community based screening program was initiated in response during this time and had the support of doctors, rabbis, and Jewish community leaders alike. This led to the great success of Tay-Sachs screening, with over 310,000 Jews screened voluntarily by 1980 for the genetic disorder. Contrastingly, sickle cell anemia screening was a “public policy disaster” and “health and medical failure” (2003: 47).  Although Tay-Sachs is much deadlier, sickle cell anemia screening became mandatory. There was distrust among African Americans towards the White medical providers that came to their communities to conduct genetic screening for sickle cell. Overwhelmingly, African American communities resisted these publically funded screening efforts. Ultimately, the Black Panthers became involved in community based screening efforts, but over-reported their findings of sickle cell anemia (due to the miss-categorization of carriers of the genetic disorder who would go on to live healthy lives) and the tension and hostility between mandated screeners, the screened, and communities only intensified.  Regulatory laws for the screening of sickle cell anemia were therefore contentious and medical mistrust deepened.

Overall, the contrast between the social and political response to Tay-Sachs and sickle cell anemia highlight the importance of the types of communities a genetic disorder affects, the policy response, and the baseline relationships between healthcare providers and the communities affected.

Discussion: The Lasting Presence of Racial and Ethnic Categorization

In our discussion, a PMEPC fellow raised the issue of the significance of racialized categorization as described in Rosenberg et al.’s (2002) article and in philosopher Quayshawn Spencer’s article titled “A Racial Classification for Medical Genetics” (2018).  The fellow emphasized how these two works provided evidence about the concordance between racial self-identification and genomic data organized by regional ancestry.  This brought up the following questions: Are these socially defined population categorizations more than proxies of health behaviors and disease probability? Are racial categories substantiated in our genes?

Upon a closer read of Rosenberg et al.’s article, the authors delineate how “self-reported ancestry can facilitate assessments of epidemiological risks but does not obviate the need to use genetic information in genetic association studies” (emphasis added; p.2381).  The data analyzed in that study was collected from the HGDP-CEPH Human Genome Diversity Cell Line Panel, which is “a resource of 1063 lymphoblastoid cell lines (LCLs) from 1050 individuals in 52 world populations.”  One of the major links observed by Rosenberg and colleagues was among populations who shared a language, however “linguistic similarity did not provide a general explanation for genetic groupings of populations that were relatively distant geographically” (p.2384).  While Rosenberg et al. point to the use of self-reported population ancestry as a “suitable proxy” for genetic ancestry, they note that an exception to this are recently admixed groups “in which ancestry varies substantially among individuals” (p.2384).

Lastly, in his testing of philosophical premises for the use of racialized categories in genomic medicine, Spencer (2018) notes a scholarly work that claims that self-identified population samples had between 98.8% and 100% membership in the respective continental categories of “Asian,” “Black,” and “White” (p. 1020).  Spencer goes on to describe how these numerical representations of self-identification with genomic population concordance do not accurately represent the relationship between these two concepts: the sample population for this particular study was of 3,224 “American” and “Taiwanese” adults and researchers deliberately excluded the “Asian” self reports from their South Asian subjects (Spencer 2018; 1020-1).  Therefore, it is important to clarify in all scholarly works that although there may be links between self-identification and genomic variability, genomic data can be curated and presented in a manner that only tell one part of the larger story of disease risk probability for specific ethnic and racial populations.

As Dr. Sun highlighted during the discussion session, precision medicine is a misnomer.  In fact, precision medicine could be best described as disease risk probability medicine where, based on available data genetic data (however categorized), healthcare professionals can provide disease risk probability information to individuals.  As national data emerge regarding the variability of population genetics and health disease markers, perhaps a silver lining lies in that that the social determinants of health will be identified (as seen in Cooper (2005), Duster (2003), Krieger (2017) and Sun (2017)) and their effects upon populations attenuated.