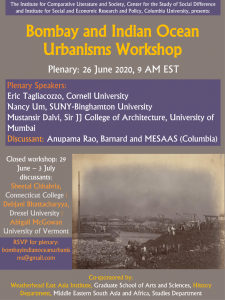 As a part of the Geographies of Injustice: Gender and the City working group we hosted our Bombay and Indian Ocean Urbanisms workshop on Zoom with four sessions spread out over a week between 26 June and 3 July, 2020. Speakers and participants joined the workshop from the US, India, Bangladesh, Hong Kong, Singapore, England, Germany, the Netherlands, South Africa, Sri Lanka, and Pakistan. The full schedule, including presenter names and paper titles, can be found here.

The workshop aimed to think about “Indian Ocean Urbanisms” as a working concept for both Indian Ocean studies and urban studies. The field of Indian Ocean studies has been shaped by studies of mercantile capital and mobility between port cities, of which Bombay has emerged as a preeminent city. Meanwhile, Bombay has become a referent in studies of cities in South Asia due to its history of activism by industrial workers and distinct forms of housing. We wanted to decenter Bombay by placing it in connective and comparative histories with other cities and thus question if we can or should consider distinct urbanisms formed by the ocean space and what can constitute the urban in the Indian Ocean.

While drawing upon the rich studies of labor, housing, and public health in Bombay, our presenters went beyond these established historiographies to consider the ocean as an agent of exchange, think through oceanic port cities comparatively, and connect Bombay with other cities such as Hong Kong, Calcutta, Rangoon, Dar es Salaam, and the seafaring towns of Gulf of Kachchh. The presenters studied connections forged across oceans that impacted functions of the cities such as real estate management, trust funds, oceanic transportations, water supply, and land surveys.

Challenges and Benefits of Moving to an Online Space

We faced some challenges in moving an in-person conference to Zoom within a span of three months, and we share our experience here in the hope that it will help others who are debating whether to host prolonged workshops online or not. We are especially grateful to Ayah Eldosougi at CSSD for making the Zoom events possible.

This workshop was originally planned as an in-person event at Columbia University on 13-14 March, 2020. Both of us graduate organizers travelled to New York from our fieldwork (and eventually got stuck in the US due to flight bans). As the airspace began to grow thin and restricted, we had to quickly cancel hotel reservations for the participants and cancel a few flights as well. Rather than cancelling the event, we decided to postpone it for a later date online because we planned to launch a longer conversation from the workshop.

We finally planned to host it on Zoom once everyone started their summer breaks. We polled availability on Doodle, and scheduled sessions in the morning in New York to accommodate as many time zones as possible. Once on Zoom, we tided over unexpected issues that one has almost begun to expect in the face of a pandemic. One of us (Sohini) had to fly back to India on an evacuation flight, and managed to host the plenary session while quarantined at a hotel in New Delhi. One of our plenary speakers, Mustansir Dalvi, recorded his speech on YouTube to ensure smooth delivery of the address amidst frequent power outages in his Mumbai neighborhood. Plenary speakers Eric Tagliacozzo and Nancy Um and discussants Debjani Bhattacharyya, Sheetal Chhabria and Abigail McGowan joined us from their homes early in the morning to accommodate those of us who were joining later in the night. In order to ensure smooth conversations, some of our discussants also sent written comments in case the internet failed in between conversations. We limited presentations to five minutes each so that we could focus more on discussions and comments. This was done keeping in mind that long lectures on Zoom have been known to cause fatigue.

Zoom also enabled more accessibility. Had it not been for Zoom, we would not have been able to reach out across so many participants in different time zones. Two of our participants who would have otherwise not managed to join us in March ended up presenting their papers on our Zoom edition. Many faculty and architects from institutions in Mumbai and other parts of Western India attended our plenary, which would have otherwise been restricted to urban history/Mumbai enthusiasts in New York. As a result, a part of our plenary talk was hosted at the Art Deco Society of Mumbai. Conversations were also more transparent and open as there were no silos that are sometimes in place at in-person conferences.

We were sharing with our audience the drafts of each paper presented, and wanted to prevent possibilities of plagiarism. In order to prevent this, as well as possible unpleasantness through the new phenomenon of Zoom bombing, we sent out password protected registration links, vetted the participants, and included people whose work had relevance to our conference. When in doubt, we checked Twitter handles or did a quick Google search. As a result, the subsequent workshops had a more limited audience, but we maintained a secure environment.

The online workshop was also an occasion for us to think about the salience of an in-person event. We missed our post-conference interpersonal conversations that often create enduring academic friendships and connections, where we draw intellectual inspirations and create the possibility of parallel collaborations. But by spreading the sessions out over a week, we also managed to avoid some fatigue that might arise from an all-day conference. Our participants were extremely engaged and enthusiastic and we hope that this online workshop has fostered an active global network of scholars and practitioners dedicated to answering questions surrounding mobility, capital, urban forms, and urban life.

Contributed by Sohini Chattopadhyay and Laura Yan, graduate organizers of the Bombay and Indian Ocean Urbanisms workshop, and Ph.D. Candidates in the History Department at Columbia University