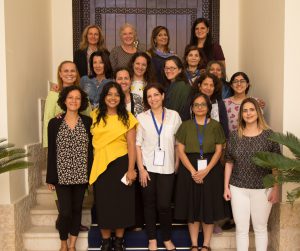 A project of Columbia University’s Center for the Study of Social Difference, “Religion and the Global Framing of Gender Violence” (RGFGV), held a two-day workshop in September to explore and debate critical developments in the global framing of gender-based violence. The participants were a mix of anthropologists, sociologists, journalists, legal scholars, development professionals, and women’s rights advocates all working on violence, feminist advocacy, and representations of Muslims and Islam. They drew on their research to address the guiding question: What role does religion—and particularly Islam—play in naming, framing, and governing violence against women (VAW) and gender-based violence (GBV)? Six themes structured the panels: Framing Islam, The Politics of Experience, Challenging Media Frames, Placing and Misplacing Blame, Pressures on Feminist Governance/ Strategies of Women’s Activism, and Reflections on Activism on the Ground.

Combating gender based violence (GBV) has emerged as a powerful agenda in international governance, national politics, and feminist and queer activism across many contexts. Dominant narratives about gender and GBV in certain regions assume that religion, often cloaked in the language of “culture” or “ethnic difference,” plays an important role. Continuing a tradition in projects at CSSD, RGFGV brought together critical thinkers and researchers working in the Middle East and South Asia, two regions where this narrative association is especially strong. They tackled issues as diverse as “child marriage” debates in Bangladesh (Siddiqi), controversies in India over women’s entry to shrines (Contractor), the politics of women’s activist organizations and influence of international agencies in now sectarian Iraq (Ali), Jordan (Ghosheh), and besieged Gaza (Hammami), reporting on gender violence in revolutionary Egypt (El-Rifae) and Occupied East Jerusalem (Shalhoub-Kevorkian), legal struggles over rape law in Jordan (Al-Khadra, Aziz), personal meanings of sexual violence for political prisoners in Iran (Talebi), the targeting of Muslim minorities in Europe (Shackle, Syeed), and even the role of GBV in U.S. Executive Orders and the counterterrorism industry (Volpp, Abu-Lughod).

Moving beyond the assumption that GBV is a universal phenomenon, the group historicized the production, applications, and implications of the term. When and how did GBV gain traction as the highly productive, powerful global concept it is today? In what ways does it bring into focus violence against certain bodies or by certain bodies while removing other violence and perpetrators from the scene? A central concern for the group was looking at what violence (and by whom) is not considered GBV. Many of the papers and discussions addressed these questions by carefully interrogating how the concept operates under specific formations of state violence that play out in the contemporary global political economy. Violence that occurs under settler colonialism or under regimes of state economic or military violence are rendered invisible by current definitions of GBV. How does blaming culture or religion for violence contribute to this invisibility?

Two of the presentations showed starkly how religion, and particularly Islam, has been implicated in staging a particular understanding of what constitutes GBV so that it can be deployed by wider geo-political projects. In January 2017, Donald Trump issued an executive order titled “Protecting the Nation from Foreign Terrorist Entry into the United States” often referred to as “the Muslim ban.” Leti Volpp analyzed the implications of its identification of “honor killings” as a problematic practice by “foreign nationals” and the mandate to collect data on cases labeled as such. Concurrently, women are being called to engage in countering violent extremism (CVE) efforts. Lila Abu-Lughod explored the way the global counterterrorism industry paints (Muslim) women as both the victims of extremism and uniquely positioned to combat it within their own communities, giving rise to demands for gender mainstreaming and inclusion in a deeply problematic enterprise.

The disciplinary and professional diversity of the working group led to intense discussion of the narratives and framing of GBV and its relationship to Islam, revealing surprising commonalities across contexts and sparking intellectual synergies. Three Media Fellows had been selected from an international pool to join the RGFGV project. Before setting off on their individual reporting research in the region–in Egypt, Djibouti, and Erbil, the journalists participated in the workshop. Discussing problems of reporting on aspects of gender or Islam in the Middle East and Europe, they gave concrete examples they had faced in terms of “framing” the issues; a central theme that emerged in the workshop. Their professional experiences showed how American and European media standards constrain and drive the narratives that get media exposure, creating dilemmas especially when reporting on GBV. For example, covering a positive story on Muslim women can end up reproducing Orientalist assumptions in the realm of public opinion.

Rema Hammami, an anthropologist who faced similar problems representing domestic violence in the Middle East offered her own “how to report on GBV” list: individualize specific men as perpetrators; treat horror stories as unique; highlight women’s agency and homegrown solutions; show cases of modernity as the problem and tradition offering solutions. Others added: show how the category and many of the practices that fall under GBV are tied to contemporary state institutions, political economic conditions, and dynamics such as war-induced migration.

The varied backgrounds of the workshop participants also led to a consensus that exploring governance and resource distribution are key to understanding the global GBV agenda. Why do issues suddenly surface as resourced research questions? How are academic studies, activism, and governmental concern shaped by geopolitical developments? Who are the players and the experts? Who is not served by these agendas? Mapping the emergence of what Abu-Lughod called securofeminists in the counterterrorism industry or exposing the shadowy forces backing the U.S. Republican obsession with “honor killing” provides evidence of how feminists and politicians are profiting, politically and financially, from conjoining Islamophobia and GBV. In contexts of wars and occupation, resources assigned to “saving Muslim women” have often led to increased militarization with harmful consequences for women and others, including the suppression of dissent, the ahistoricization and de-contextualization of GBV and the undermining of local women activists. Hammami’s analysis focused on how international humanitarianism privileges resources for anti-GBV pedagogy amid the destruction and destitution of Gaza enabling it to colonize local activisms, misrepresenting activists’ calls to the world while undermining more relevant local projects. Her account provided sobering evidence of how the global GBV agenda can place “off-limits” urgent demands for political justice and transformation by populations subjected to acute forms of state violence.

A political economy of fear that dehumanizes certain populations according to their religious, racial, or cultural backgrounds shapes many of the contexts of violence in the regions the workshop discussed. This political economy of fear justifies material resources that fund the global GBV agenda, embedding racism, sectarianism, and imperial interests in too many of the programs meant to combat gender violence. Cross-regional discussion of humanitarian GBV, the NGO-ization of gender issues, and the politics of international aid revealed how political violence gets occluded by the human rights framework in which GBV and VAW are situated. Local development practitioners, legal advocates, and activists in the group (Aziz, Haram, Ghandour, Ghosheh) gave disturbing evidence of the influence of donor culture in the work they are attempting to do. They insisted on the agency of actors on the ground and detailed the complex, and often contradictory, political, theoretical, and structural issues they must negotiate.

Sara Ababneh drew attention to the ways feminist methodology, active listening, and attentiveness to experiences of women and girls could contribute to more robust definitions of GBV. The position of the girl child was given careful attention. How do historical and present contexts of colonization dictate legal and social policies to protect her or to oppress her? In Bangladesh, Dina Siddiqi described the way donors and local feminists may, in the name of protection or productivity, be undermining girls’ sexual agency. In Occupied East Jerusalem, as Nadera Shalhoub-Kevorkian demonstrated, the sacralized theology of the Israeli state frames girls as security threats in order to justify bodily harm and suppression of their rights. In Jordan, legal advocates have been debating the merits of laws about marrying one’s rapist, given the structure of current alternatives. To what extent should the voices of girls and women be used to define and redefine GBV?

Participants were exhilarated by the honest critical exchange of experiences, ideas, and knowledge during this workshop. They shared a commitment to advancing understanding of the challenges faced by those who feel the urgency of addressing gender violence. The workshop closed with two memorable activities: invitations to a private viewing of Widad Kawar’s collection of Palestinian and Jordanian women’s dress at Tiraz and a dinner hosted by Nissreen Haram to introduce the group to the wider dynamic scene in Amman of lawyers, artists, scholars, politicians, activists, social philanthropists, and entrepreneurs.

Supported by a grant from the Henry Luce Foundation, RGFGV partnered with the Columbia Global Center | Middle East, Amman for this workshop. CSSD projects on Women Creating Change are committed to internationalizing scholarship and knowledge. Previous projects such as Women Mobilizing Memory, Gender and the Global Slum, and Social Justice after the Welfare State have partnered with Columbia’s Global Centers in Istanbul, Mumbai, and Paris to further this goal. RGFGV is co-directed by Lila Abu-Lughod, Rema Hammami, Janet Jakobsen, and Nadera Shalhoub-Kevorkian. For the workshop program, click here.