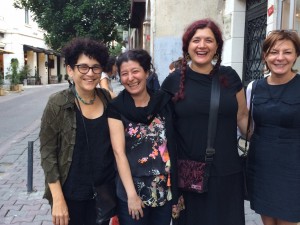 Jean Howard, Ayşe Gül Altınay, Milena Grass, and Andrea Crow participated in the opening panel of Women Mobilizing Memory, a working group that explores women’s acts of witness and the gendered forms and consequences of political repression and persecution.

Women Mobilizing Memory is one of four working groups that, together, make up the “Women Creating Change” initiative of CSSD. The first-day conversation of the working group revolved around a range of themes, including: the academic/practitioner divide; the political efficacy of academic, artistic, and activist productions; the relationship between memory, history, and archives; the ethical repercussions of witnessing; as well as the intricate link between the personal and the political.