Of Waves, Tides and (Feminist) Tsunamis: a Student Response to What We CAN Do When There’s Nothing To Be Done 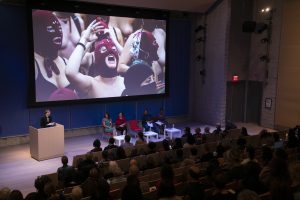 The following was written in response to the tenth anniversary symposium of the Center for the Study of Social Difference (CSSD), held at The Forum at Columbia on September 28, 2018, by Mayte López, Graduate Teaching Fellow in the PhD Program in Latin American, Iberian, and Latino Cultures (LAILaC) at The Graduate Center, CUNY:

As I sit down to write this essay, Brett Kavanaugh has been confirmed as a Supreme Court Justice. The government of the United States, a country that welcomed me over six years ago and that I call my home, has granted Kavanaugh a lifetime appointment that allows him to rule and legislate over women’s bodies. Our bodies. A man who has been accused of sexual assault by multiple women, a man who has shown absolutely no respect for a woman’s body or will, a man-child whose only excuse for sexually assaulting a woman seems to be his incommensurate love of beer, now has the power to decide the future of legal abortion in this country and, possibly—most likely—overturn Roe vs. Wade. Lately, I’ve read multiple statements comparing Dr. Christine Blasey Ford’s testimony during the Ford-Kavanaugh hearing to that of Anita Hill. “I believe survivors. I believe Christine Blasey Ford. And I still believe Anita Hill” can be read all over my protective social media bubble, the carefully —albeit unintendedly—crafted echo chamber I’ve built for myself over years of likes, loves, and unfollows. What scares me the most about that last sentence is the fact that when it comes to Dr. Blasey Ford, it’s not a matter of belief or credibility. People—senators—believed her. Her testimony was not considered untrue. It was considered, and this is what makes my spine shiver, unimportant. What the Senate is telling this woman, and all women for that matter, is that their government doesn’t care. Politics trumps human decency, and Donald Trump trumps all of us. “A girl has no name, a woman has no government.”

In light of these events, the phrase “What we can do when there’s nothing to be done,” proposed by the Center for the Study of Social Difference at Columbia (CSSD) during their 10th Year Anniversary Conference, becomes even more meaningful. Can we do something? Is there really nothing to be done? I compose myself and recall Judith Butler’s intervention during the conference. Butler spoke about what it means to act in the midst of pessimism, and to keep that pessimism from becoming hopelessness. Radical transformation, she affirmed, starts incrementally and there is something to be said for momentum, for the continuing struggle of activism over time and with others.

So, what can we do? First, let me address—as was done during the opening remarks and throughout the conference—the problematic nature of that we. What does it mean, these days, to think about a collectivity? However problematic, and since I am especially concerned with women’s bodies today, and external decisions surrounding said bodies, I choose to embrace that we not only in that I am a woman, but in that I am that other marginalized and subjugated to the wishes (and “drinking games”) of white, rich, Ivy-league-educated men. I am also many other others, as Judith Butler’s invocation of #NiUnaMenos, the hashtag of the movement against gendered violence that has run through Latin America like a flame, reminds me. The movement was born in 2015 to protest feminicidio—the systematic killing of women— in Argentina, but the slogan actually has its origin in a poem by Mexican poet and activist Susana Chávez. The poem, written in 1995 in protest of Ciudad Juárez’s own appalling number of feminicidios, included the verse “Ni una muerta más” (Not one more [woman] dead). Chávez was a victim of feminicidio herself in 2011, and activists proposed the use of the slogan alluding to her poem to help fuel the movement.

As Butler stressed during her intervention in the conference, what’s most remarkable in these scenarios is that certain issues start to link with one another. Women, she said, are demanding the right to have abortions. Not the right to “choose,” as the time for euphemisms is now long gone. In Latin America, the debate around legal abortion is definitely making waves because of its narrative. The discussion now, stress the activists, is not whether women should abort, but whether abortion should be made safe and legal for all, as opposed to life-endangering and clandestine for the poor: women have always gotten abortions, but only some women can pay for the high costs of a covert and illegal surgery. It’s not only a women’s issue but a class issue. In Argentina, women—and men—understood this, and in August 2018 they protested and marched, took to the streets, and stood outside the Senate for hours, waiting for a vote to legalize abortion that was ultimately rejected. The protesters wore green handkerchiefs and clothing, which granted the movement the nickname “la marea verde” [The Green Tide]. After the vote was cast, la marea still stood outside the Senate, jumping up and down, repeating slogans, and dancing, only momentarily defeated: “It’s ok, we’ll win next year,” they said, while chanting “Se va a caer, se va a caer, el patriarcado se va a caer” [It’s going down, it’s going down, patriarchy is going down]. Indeed, unabashed by the results in Argentina, a few weeks later, on September 2018, another Green Tide took to the streets in Mexico —where I come from— to make very similar claims: Mexico’s own marea verde, wearing similar handkerchiefs, demands legal abortion nationwide —as it is legal in Mexico City—and for feminicidios to stop. The momentum Butler spoke of, with its multiple interlinked issues, is—it has to be—transnational and collective.

During the first panel of the CSSD Conference, Chilean performance artist and theater professor María José Contreras spoke of a “feminist tsunami,” and of the importance of the body as a preferred device to mobilize political critique. The bare chests of young women clad in personalized balaclavas, and the confirmation that these women had indeed achieved changes in the Chilean legislature, made the following speaker (as well as myself, and I would bet, many in the audience) feel like “just a woman in the world”. There was something profoundly powerful in those balaclavas, and in the women wearing them, their fists and hands raised, out in the streets making a case for their reproductive rights and against gendered violence. Their victory, their smiles, challenging our previous ideas of what was—what is— possible, seemed to imply that there is a lot we can do (when there’s nothing to be done). The fierce balaclavas, and the reference to a feminist “tsunami,” got me to thinking: how do we go from waves, to tides, to tsunamis? Movement, Butler affirmed, emerges in the course of struggle.

The Kavanaugh-Ford hearing, which had taken place on the day prior to the CSSD conference, was lingering in the air and was brought up by multiple speakers, including Butler herself, who made a brief but tension-relieving and laughter-provoking impersonation of Kavanaugh, much welcomed by the audience. A conference statement was written on the spot strongly opposing Kavanaugh’s confirmation and was projected on the huge screen of the auditorium and, at the close of the conference, we stood in front of it for a picture that recorded our strong opposition to the confirmation as students, teachers, writers, artists, and others. Standing there, with my hand up high, clenched in a fist, I felt a tinge of movement, perhaps—dare I say it—a tiny wave. Now, much like the Green Tide standing outside the Argentinian Senate, we have lost. Again. So, to quote Butler once more, what does it means to act in the midst of pessimism? And how do we keep that pessimism from becoming hopelessness? I do not have the answers but perhaps we should take a cue from the women jumping up and down in Buenos Aires after the Senate had cast a vote against their reproductive rights. Crisis, journalist Masha Gessen pointed out during the conference, is a time of opportunity. Perhaps the answer lies, as Butler suggested, in transnational collective movement emerging in the course of continued struggle. For waves and tides to become tsunamis, we must not stop moving. “Se va a caer, se va a caer, el patriarcado se va a caer”.