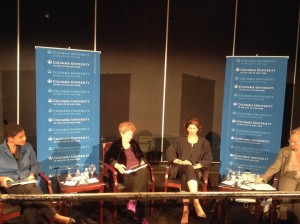 In 2012, women comprised an impressive majority of the electorate. Currently, women hold a majority of twenty seats in the Senate. More women than ever before are raising young children while serving at the Capitol. Moreover, it is likely not only that the U.S. will see a woman presidential candidate in 2016, but also that Republicans will again nominate a woman for their vice presidential seat. “Women and Politics: A Turning Point?,” the 2014 public program co-hosted by Women Creating Change, a global initiative of the Center for the Study of Social Difference, and the Columbia Alumni Association (CAA), explored these and other issues in a roundtable discussion, featuring: Manhattan Borough President Gale A. Brewer ‘97GS, NPR reporter Mara Liasson, and poet and Nation columnist Katha Pollitt ‘75SOA. Professor of Sociology and Gender Studies and Dean of Social Sciences Alondra Nelson moderated.

The speakers were in agreement that the 2012 election cycle could augur an exciting turning point for women in politics. According to Liasson, “This year, Republicans realized that they are behind the curve.” She noted the marked increase in Republicans who have been “coming out for over-the-counter birth control,” even though no drug company has ever appealed to the FDA for it. But, for Liasson the point is not whether Republicans’ current stance on birth control is realistic. Rather, in her view, “It is progress when Republicans are for over-the-counter birth control, because it means they’re moving farther to the center,” regardless of what their political motives may be.

Pollitt preferred to view Republicans’ new stance on birth control as part of a broader, less optimistic historical shift. She pointed out that making birth control available over-the-counter would actually delimit women’s access to reproductive rights—cutting benefits through Obamacare, such as free copays, and discouraging women from seeking a physician’s advice about the best medication.

Nelson broadened the conversation by noting that 2014 was a watershed year for women holding presidential seats in countries such as Chile and Liberia. She asked, what sort of promise do these leaders hold out for women’s political progress all over the world?

Both Brewer and Pollitt echoed the sentiment that simply having women leaders in positions of power is not enough. Brewer addressed the problem of the political pipeline and women’s access to power. On a pragmatic level, entering the pipeline—whether via work on a community board, a municipal district, holding office in a PTA or participating in other ways in the women’s movement—is the surest way for a woman to enter politics.

Pollitt interjected with a question that helped to focus the conversation: “Are we talking about women, or are we talking about feminists?” According to Pollitt, a neoconservative politician like Michele Bachmann (R-Minn.) is a prime example of a woman leader who is not always working on behalf of women’s rights. Although Pollitt recognized the practical advantage of the pipeline that Brewer described, she pointed out that a lot of women leaders—such as Margaret Thatcher in the U.K., or perhaps even Hillary Clinton here in the U.S.— emerge from pipelines built on political dynasties rather than civic engagement.

As the conversation turned towards the possibility of Clinton running for the Democratic presidential seat in 2016, Pollitt remarked that Clinton might “dis-identify herself from women as a ‘special category,’ instead trying to position herself as ‘the President of everyone.’” Liasson suggested that the white, married women who voted for Mitt Romney in 2012—and whose vote Romney won against Obama by seven points—could very likely vote for Hillary. “I think that a lot of married women who voted for Mitt Romney will look in the mirror and see her looking back,” said Liasson. “I believe that the first woman President of the United States has to be old,” Liasson added. “There can’t be any question amongst voters about whether she’s qualified or has the necessary experience.”

Brewer agreed, adding that Clinton is also “unique.” According to Brewer, Clinton represents a woman leader who, even in her position as Secretary of State, tried to find nonviolent ways to “promote peace through art” around the world, using our own city’s collections at the Metropolitan Museum of Art.

A very passionate audience brought a number of new issues to the table during a rousing Q&A. Perhaps the most provocative questions concerned the particular obstacles facing women of color with political aspirations and the problems that partisanship raises, which one audience member implied could be seen in the all-Democratic composition of the panel itself. To the women-of-color question, Brewer ardently advocated for campaign finance reform at all levels, pointing out how hobbling socioeconomic disadvantage is for women of color in electoral politics.

“The good news is that the rising American electorate are young and minority,” Liasson. If we are indeed on the brink of a turning point in electoral politics, as these speakers’ hopeful words predict, then it seems we can count on witnessing more diversity and younger voices in the near future—even if an end to fractious partisanship is not yet in view.