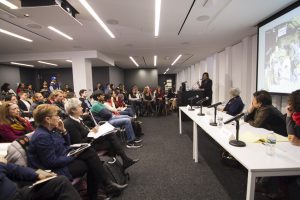 On November 16, 2017, the CSSD working group Reframing Gendered Violence presented “Gender and the Technologies of State Violence: Innocence-Disposability-Resilience” in the Case Lounge of Jerome Greene Hall at Columbia Law School, along with the Center for Gender and Sexuality Law.

“The Reframing Gendered Violence project seeks to engage critically with the terms, assumptions, and policies that have underwritten an outpouring of attention and activism over the last couple of decades on violence against women and gender-based violence,” explained project co-director Lila Abu-Lughod, Joseph L. Buttenwiser Professor of Social Science, as she introduced speakers Sherene Razack, Nadera Shalhoub-Kevorkian, and Miriam Ticktin.

In keeping with the objectives articulated by Abu-Lughod, “Gender and the Technologies of State Violence” offered several compelling approaches to the problem of gender-based violence. The sixth installment of the two-year Reframing Gendered Violence project within the Women Creating Change initiative at the Center for the Study of Social Difference, it was co-sponsored by the Dean of the Humanities and the Columbia Global Centers.

Sherene Razack, Department of Gender Studies at UCLA, opened the panel with a paper entitled “Where Is Settler Colonialism In Analyses Of Gender Violence?” “How do you analyze the violence that comes at indigenous women, remembering the fact of settler colonialism?” she asked. “And how do male colonizers come to know themselves through violent encounters with indigenous women?”

Nadera Shalhoub-Kevorkian, Law School, Hebrew University, approached similar questions in the context of Israeli settler colonialism in her paper “Should State Violence Against School Girls Be Called Gender Based Violence?” Pairing the testimony of Palestinian school girls with photographs of their harassment by Israeli soldiers, she showed how state violence can also manifest as gendered violence.

Elaborating on the insights of Razack and Kevorkian, Miriam Ticktin, Department of Anthropology, New School University, concluded the panel with a paper titled, “Would Getting Rid Of The Concept Of Innocence Enable Us To Address Gendered And Racist Violence?” “Innocence has moved to the center of political life today,” argued Ticktin. And yet, “only some people in some places get noticed when innocence is what draws our attention…Ideas and images of innocence and the moral authority they engender have a long history of actually hurting the people they intend to help.”

The Reframing Gendered Violence project will continue on January 25 with a panel on “Interrogating culture-based explanations for violence against women.”