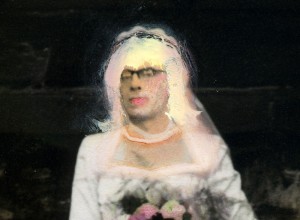 On April 9th, the Center for the Study of Social Difference and the Women’s, Gender, and Sexuality Studies Council co-sponsored the roundtable discussion Keywords: TRANS. The Keyword panel comprised Jack Halberstam, Professor of American Studies and Ethnicity, Gender Studies and Comparative Literature, University of Southern California; Jack Pula, Instructor of Psychiatry, College of Physicians & Surgeons, Columbia University and Chairperson of the Transgender Committee, Association of Gay and Lesbian Psychiatrists; and Yasmine Ergas, Co-Chair of the Women’s, Gender & Sexuality Studies Council, Director of the Gender & Public Policy Specialization, and Lecturer in the Discipline of International and Public Affairs, SIPA. The program was moderated by Jean Howard, CSSD Director, George Delacorte Professor in the Humanities and Chair, Department of English and Comparative Literature, Columbia University.

Professor Halberstam spoke about artist Sara Davidmann’s photo series chronicling the life of Davidmann’s Uncle Ken, a married man who was trans* and simultaneously lived as K, something Ken and wife Hazel kept a secret until their deaths. Halberstam said K’s life showed how trans* lives disrupted linear narratives and traditional ways of writing history. Halberstam argued that it is difficult to tell trans* histories because terms and definitions change so quickly and that scholars have focused on histories of violence at the expense of narratives about silence and secrecy. Halberstam also explained that trans* lives aren’t isolated from the stories of everyone else in their lives. Social norms and dominant categories affect the trans* person and influence the relationships they have. Halberstam suggested that scholars think about parallel lives in the experience of trans* persons so that in writing a narrative, no part of their life is erased. 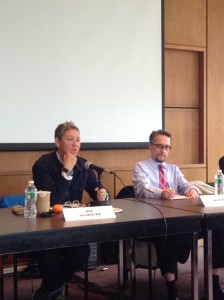 Jack Pula spoke about working professionally on gender dysphoria as a trans* man. Acknowledging that political controversy has followed psychiatrists’ definitions of gender identity, Pula considered how to combine subjective and objective forms of knowledge to make satisfactory claims about gender.

Pula warned that medicine and psychology often fall prey to reductive thinking, especially around identities that are known subjectively. Since language cannot capture all oppressed gender categories, it can itself become oppressive. Pula connected to Halberstam’s point about the difficulties inherent in using linear narrative to explain K and her gender identity. Pula argued that the etymology of identity could not begin with medicine and psychology because gender is first and foremost a subjective experience. 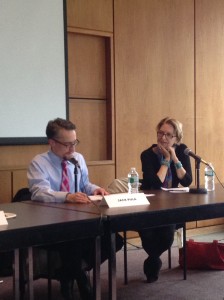 Yasmine Ergas examined the inchoate nature of the prefix “trans” and that “translation” was a process. In Ergas’s view, “trans-” as a prefix was insufficient, but still came closest to what it means to cross boundaries. Ergas shared how transnational surrogacy and adoption often leave children stateless and parentless. In its worst incarnation, transnational surrogacy has led to human trafficking.

For children, “trans-” is a matter of civic belonging. Ergas asserted that transnationalism challenged the presumption of national exclusivity and the processes of immigration, civil marriage, and the acceptance of educational credentials. Because of these structures, “transnational” still challenges a monopolistic system that, with limited exceptions, is based on an either/or binary. For surrogate children abandoned by their sponsors and who have no tie to national kin, this can mean existing in a legal no-man’s land. In the end, “transnational” remains anchored in the idea of nations.

The Q&A that followed the panel helped to weave together the presentations. Halberstam noted that just as “transnationalism” assumes the stability of the nation, “transgender” demonstrates the violence of gender dichotomies. Euro-American dichotomies of nation or gender continue to perpetuate colonialism and structure how scholars frame their research and get it funded. For Halberstam, transnationalism revealed how Euro-American constructions of transgender obscure other cultural and gender norms.

An audience member who saw limitations with the prefix “trans-” asked for alternatives. Ergas explained that dropping the prefix doesn’t obliterate the core words of nation or gender. In a sense, “trans-” implied a patchwork, she argued. Halberstam stated that people assemble under the heading trans* but often acknowledge more differences than similarities. The panel ended with an eye on the future: youth today speak more fluently than ever before about trans* life and this suggests the possibility for more humane understandings of individuals connected to the word.