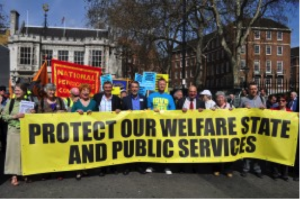 What is the welfare state?  What happens when it disintegrates? What is the future of the family in light of its historical transformation?

Scholars and graduate students from research universities in the United States, France, the United Kingdom, Italy, the Netherlands, Denmark, Sweden, and Norway convened to answer these questions during the Shifting Notions of Social Citizenship: The “Two Wests” workshop, held June 11-13, 2014 at the Columbia Global Center | Paris.

What constitutes a welfare state?

Papers in the first session took up the definitional challenge by thinking about the concepts that undergird the intellectual production of the welfare state in the European Union and in comparative context between the United States and Sweden. Vincent Michelot (SciencesPo Lyon) chaired presentations by Maurizio Ferrera (University of Milan), Ann Shola Orloff (Northwestern University), and a research group that conducted a longue durée analysis of the welfare state in France and the United Kingdom, rooting the welfare state’s earliest beginnings in the 17th century and well before industrial capitalism supplanted mercantilism.  Ferrera outlined the intellectual and political roots of the European Union idea, suggesting that a “neo-Weberian” typology offered solutions to the intractable differences between ideas about national sovereignty and the EU’s political and economic superstructure.  Orloff examined “gendered policy formation” and rebutted arguments that the state simply reinforced paternalism as too simplistic.  Orloff’s analysis challenged participants to think about how historically changing definitions of gender changed social policy and vice-versa.

What happens when safety nets go?

Day two opened with the question, “What happens when safety nets go?”  Donna Kesselman (University Paris Est Créteil) chaired presentations by Christian Lammert (Free University of Berlin), Beatrix Hoffman (Northern Illinois University), and Sébastien Chauvin (University of Amsterdam).  Lammert argued that in the process of re-commodification, the visibility of the welfare state’s provision in people’s lives diminishes, which undermines public support for these programs. The results are pernicious for democracy because as people are forced back into the labor market and forced to accept a shrinking safety net, their level of political participation also declines.  Hoffman dug into the problem of healthcare in the welfare state by comparing citizen participation for health reform in Spain and the United States.  Hoffman showed how Spain’s generous healthcare provision has failed to embrace the healthcare needs of a growing number of immigrations and how the United States has become increasingly less responsive to the demands of civil rights organizations, especially after hospital closures zipped through urban neighborhoods during the 1970s and 1980s.  Chauvin answered the question from the perspective of precarious labor and the growing exploitation of contingent—not temporary—workers.  Through participant-observation in two contingent work dispatch centers in Chicago, Chauvin asserted that the idea of “temp work” is a fiction because precarious workers often develop long-term relationships with a small number of employers.

The Future of the Family

The next session envisioned the future of the family.  Mario Del Pero (Institut d’Études Politiques) chaired presentations by Chiara Saraceno (University of Turin), Robert O. Self (Brown University), and Laura Lee Downs (European University Institute, Florence).  Saraceno argued that the EU forces a plural acknowledgement of different family forms and that family and family policy are not one and the same.  Civil regulation regarding the family contains variety, but remain attuned to traditional conceptions of the family.  Self argued that the push for the reconstruction of the welfare state after the 1960s came mostly from the center left, rather than reactionary forces.  The extent of social solidarity from the New Deal had been exaggerated, while the myth of the breadwinner was a social idea before it ever became an economic reality.  Downs pondered the future of social protection in France by looking at the history of its colonies de vacances, holiday camps that were established for working-class children throughout the country.  The extent of centralization in France meant that the diversity of political and ideological groups that participated in the state was far-reaching.  At the same time, Downs shows how fiscal pressures during the 1970s and 1980s, demonstrating just how reliant all groups were on a state committed to financing social activities and opportunities to build national solidarity and to develop equality among young adults.

Possibilities of Resistance and Solutions

The last session, held on the last day of the workshop, thought about possibilities of resistance and solutions to the present-day impasses and challenges to the welfare state.  Olivier Giraud (CNAM) chaired presentations by Gro Hagerman (University of Oslo), Birte Siim (Aarlborg University), Marissa Chappell (Oregon State University), and Neil Gilbert (University of California-Berkeley).  Hagerman questioned whether the Norwegian and Swedish welfare states could “have it all,” arguing that the fiscal basis of both welfare states is premised on their status as resource-rich states. Siim asserted that democracy and citizenship needed articulation outside of the nation-state framework and that the rise of right-wing populism was more than just racism and constituted a serious critique about the distributional objectives of the state.  Chappell’s archival research found that the Civil Rights Movement galvanized movements for greater economic citizenship among poor people; however, gender bias and racism prevented the formation of alliances.  Gilbert traced how the U.S. welfare state transformed from a system of entitlement to one increasingly checked by means testing and conditionality.

The workshop concluded with Vaudagna and Kessler-Harris synthesizing the wide-ranging contributions of the speakers and the dialogic exchange that occurred between sessions.  All participants left with a greater sense of the enormity of the welfare state as an object of study and the importance of comparative analysis between countries and even supranational structures of governance.  The work of thinking about the welfare state in historical, social and political perspective continues.