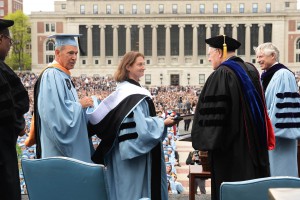 At Columbia’s dinner honoring the degree recipients, Meiselas said that the collaborative work of the group not only furthered interaction between the New York campus and the Columbia Global Centers in Istanbul and Santiago but also acted as a form of intervention.

Meiselas’ attention to documenting individual stories as well as systemic injustice provides a powerful model for the group’s use of the arts as a feminist means of mobilizing memories of violence in the interest of social justice, said Hirsch.