Alisa Solomon Examines the Historic Theater of “Hamilton” in The Nation 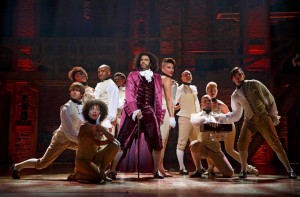 Alisa Solomon, Women Mobilizing Memory member and associate professor of journalism at Columbia University, wrote in The Nation that “Hamilton” is not only a game changer because it brings rap to Broadway, but also because it integrates the contemporary musical style so seamlessly with the styles and structures of traditional musical theater.

While acknowledging rap as the latest popular music deserving to contribute to Broadway, the show also pays tribute to the older form by examining the themes of self definition and Americanness, both longstanding elements of American musical theater, according to Solomon.

The strong, multiracial casting of “Hamilton”  also establishes that America’s history—and its future—belong to men and women of color as profoundly as to anyone else, she writes.