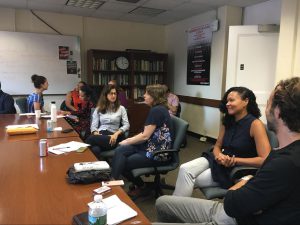 On October 10, 2018, the working group, Unpayable Debt: Capital, Violence and the New Global Economy, led by professors Frances Negrón-Muntaner and Sarah Muir, hosted a launch event for the Second Edition of the #NoMoreDebt: Caribbean Syllabus. The group also launched the book Art After Money, Money After Art: Creative Strategies Against Financialization by Max Haiven, Canada Research Chair in Culture, Media, and Social Justice at Lakehead University.

The Unpayable Debt working group at the Center for the Study for Social Difference (CSSD) explores the role of debt in capitalist societies, and how indebtedness is mutually informed by histories of colonization. In May of 2018, the CSSD working group published the first ever resource to study debt and the Caribbean with the release of Caribbean Syllabus: Life and Debt in the Caribbean. The syllabus has been used internationally among scholars, artists, activists, and others, to stimulate conversation about the complex colonial and capitalist contexts that generate debt. The second edition contains three new sections that raise critical questions about indenture, law, and education. The syllabus has also been translated into French, Spanish, and Dutch, as a means of furthering expanding the conversation. The launch event provided a venue for artists, academics, and activists, to think through cycles of indebtedness and the question of “who owes what to whom”.

It was thus fitting that the event began with Max Haiven’s workshop “Rebel Currencies.” He spoke about artists and activists coalescing to challenge the current moment of financialization, in which everything has market value and our imaginative scope is oriented toward the production of more money. Professor Haiven discussed the commodification of art, but also, the potential for art to decrypt money. He explored several projects in which artists used money as a form of activism. One instance of this is Zachary Gough’s project, Bourdieux: A Social Currency. Gough brought his own crafted currency to academic and art conferences, which he distributed to all the participants. Whenever an act of social exchange occurs, participants are encouraged to exchange the currency. It’s a funny – and admittedly uncomfortable – process that reveals the economy of social capital, and the generation of power in exchanging things of value.

Next, we heard from the most recent contributors to the Caribbean Syllabus about their contributions. Tao Goffe, Assistant Professor and Faculty Fellow of Social and Cultural Analysis at NYU, contributed a unit entitled, “Intimate Bonds and Bonded Labor: Indenture and Debt Peonage in the Caribbean.” This section explores Chinese indenture in the Caribbean, specifically thinking through intimacy, the afterlife, and media. Monica Jimenez, Assistant Professor in the African and African Diaspora Studies Department at the University of Texas at Austin, provided unit eight of the syllabus, “The Role of Law in the Production of Debt.” This unit brings forth questions of the legacy of law and empire, and specifically, how the United States created an imperial debt relationship. Lastly, Jason Wozniak, Lecturer in Philosophy at San Jose State University, focused on education and debt. He argues that debt projects students into a non-democratic future that channels education into a “return investment paradigm.” In this addition to the syllabus, “Caribbean Education Debt”,  he explores how debt impacts formal and informal experiences of education in the Caribbean.

With these new additions, the Caribbean Syllabus: Second Edition now encompasses 18 units through which educators, activists, students, and artists can think through the colonial and capitalist lineages of debt in the Caribbean. It was wonderful seeing students and scholars alike exchanging ideas on the politics of debt. 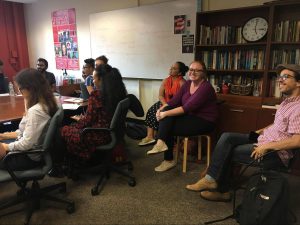 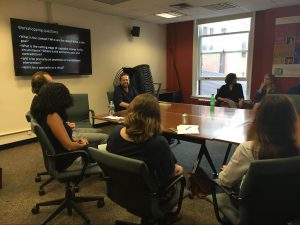 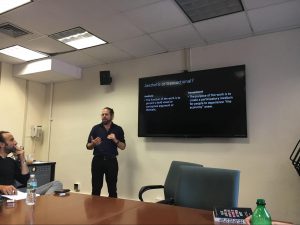