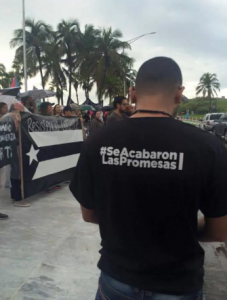 On May Day, 2017, CSSD’s Unpayable Debt working group launched its PRSyllabus, a resource to study Puerto Rico’s $70 billion debt crisis in the context of over one hundred years of colonial governance by the United States.

“The syllabus comes at a critical time,” says working group co-director Frances Negrón-Muntaner, Professor of English and Comparative Literature, Center for the Study of Ethnicity and Race, Columbia University. Her point was confirmed when the syllabus attracted nearly 7,000 views on its first day.

“Today unions have declared a national strike. Students at the University of Puerto Rico are also on strike to protest extreme budget cuts and support demands for an independent audit while an unelected board with ties to the lending industry supports extreme austerity measures that have been unsuccessful elsewhere in the world. To guide more effective policy, we need to reorient our thinking and become better informed about the roots and consequences of the crisis. Our work suggests that participatory and transparent governance, economic revitalization, and full investment in fundamental human needs like education and health are better ways forward.”

Created by working group members and collaborators Yarimar Bonilla, Marisol Lebrón, and Sarah Molinari, the syllabus provides a list of resources for teaching and learning. The syllabus’s goal is to contribute to the ongoing public dialogue and rising social activism regarding the debt crisis by providing historical and sociological tools with which to assess the crisis’s context and repercussions.

“With this syllabus we tried to highlight how the contemporary debt crisis emerged from a history of extractive colonial practices that continue to produce intense insecurity in the lives of millions across Puerto Rico and its diaspora,” adds Lebrón. “We also sought to emphasize the inspiring and creative ways that Puerto Ricans are coming together to fight against austerity, since these efforts are often invisible in mainstream news coverage of the debt crisis.”

PRSyllabus is the first in a series of three syllabi that the working group will release over the next year in relation to the damaging effects of debt on various locations around the world, including Detroit, Greece, and the Caribbean. The Puerto Rico syllabus can be accessed here.