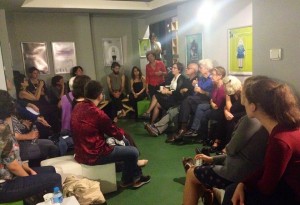 In the first roundtable on “Creating Alternative Archives,” Leyla Neyzi introduced her recent project on Kurdish and Turkish youth living in Turkey and Germany with visual examples from the project’s website. Neyzi especially focused on intergenerational memory, post-memory, and Kurdish and Turkish youth’s different conceptions of time and history. Özlem Kaya began her talk by introducing the Truth Justice Memory Center, which is an independent human rights organization that is based in İstanbul. Kaya explained how the Center contributes to uncovering grave human rights violations at times of conflict and in strengthening the collective memory about those violations. Currently, the Center is trying to create an alternative archive through video testimonies about enforced disappearances in Turkey. Susan Meiselas discussed her web-based project akaKurdistan, which she founded in 1998. She explored the possibilities of creating visual histories and building memories with people who have no national archive. She focused on how multiple perspectives and hidden archives came together in the production of this collective archive of Kurdish memory. Silvina der Meguerditchian noted how her artistic works deal with issues related to the burden of national identity, memory, the role of minorities in the society and the potential of a space “in between.”  The roundtable was followed by a screening of Silvina’s new film “Nereye/Where to,” which follows the traces of İstanbul’s lost minority communities in Fener and Balat, revealing the complexities of recovering memory.

In the second roundtable, titled “Art, Performance and Memory,” Andreas Huyssen discussed the recent changes in museum culture, pointing to a “metamorphosis of the museum.” Huyssen explored how the museum has been transformed from a site of memory as an “exhibitionary complex” to a mass medium as an “experiential complex.” Alissa Solomon drew attention to the current wave of museum building across the world as one of the emerging global tropes of memorialization. She asked various challenging questions and explored the answers through one type of global trope: the shoe. By looking at piles of shoes, seen in memorials and protests among other places, Solomon asked whether we can represent the scale of mass atrocities without blurring over individual differences. Carol Becker talked about Kara Walker’s new site-specific sculptural installation at the now defunct Domino Sugar Factory. Becker argued that the sculpture echoes the memory of slavery by focusing on how Black women were exploited in the history of the sugar industry that dominated the Caribbean and the American South for a century. Becker explored how reactions to this sculpture are indicative of the growing insensitivity of the United States to the subject of race and racism. Diana Taylor noted Regina Galindo’s piece Earth, which depicts the trial of ex-dictator Rios Montt. Taylor discussed the political efficacy of testimony in Galindo’s performance art on genocide. In her talk, Maria José Contreras focused on forgetfulness and its relation to memory in the performative dimension. Contreras asked whether we can think of forgetfulness for embodied memories. Furthermore, she traced the capacity of prosthesis in performance art to recuperate memories and evade forgetfulness.

The third and the final roundtable, “Gender, Memory, Activism” started with Marita Sturken who explored how architectures of memory, architectures of torture and architectures of conflict are shadowed by a culture of comfort and sentiment. Sturken asked whether we can think of modern architecture as an infrastructure for framing space and memory. In her talk, Marianne Hirsch discussed the works of several artists who activate small, fragmentary archives and allow them to travel and migrate, creating networks of connectivity that challenge the monumentalization of memory and resist national paradigms that erase difference. Nükhet Sirman noted the Women’s Initiative for Peace, which is a group of approximately 500 women, all dedicated to forging a peace between the Kurdistan Worker’s Party (PKK) and the Turkish State. Sirman explained how they, as a group, appointed themselves to bear witness to the atrocities that were committed against Kurds in the 1990s, especially the gendered crimes. Meltem Ahıska drew attention to how Saturday Mothers of Turkey made the enforced disappearances visible by a counter-movement. Ahiska argued that this counter-movement has played a significant role not only in creating a new space for politics, but also by enacting political memory. Saturday Mothers has infused spaces with memory since 1995 through their silent sit-ins. Nancy Kricorian concluded the panel by remembering Armenian history on a pilgrimage through her grandfather’s hometown in Turkey.

Pinar Ensari is an alumna of Sabanci University’s Department of Cultural Studies.