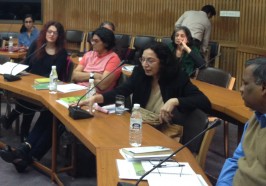 The working group Gender and the Global Slum convened a closed workshop December 21-22, 2015 at the India International Centre in New Delhi on “The Difference of Caste.”

The workshop served as preparation for the forthcoming publication of a volume of the same title concerning the intersections of caste, gender, sex, and social difference, to be edited by Anupama Rao and published by Women Unlimited.

The Difference of Caste will extend and elaborate on issues that were first addressed in a reader entitled Gender and Caste: Issues in Indian Feminism, that was published by Zed in 2003. Gender and Caste asked scholars to recognize caste’s centrality to the production of the gendered subject, and feminism’s complicity in producing a limited, or partial subject of feminism.

The workshop was supported by funds from the Institute for Comparative Literature and Society, and the Center for the Study of Social Difference. Read more about the workshop here.