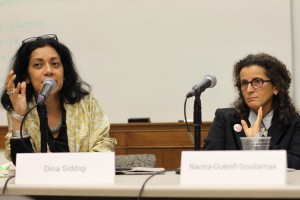 “Why and when is religion invoked in global responses to gendered violence? What roles are attributed to religion? What categories of the religious become seen as credible in anti-violence work?”“Who pays the price and who benefits from the ways that religion is used to frame global understandings of gender violence?” asked Lila Abu-Lughod, Joseph L. Buttenwieser Professor of Social Science, Columbia University and CSSD project director, as she opened a November panel on “Religion and the Global Framing of Gender Violence: Beyond the Muslim Question.”

The second in a series of events for the CSSD’s Reframing Gendered Violence project, the panel extended the discussions of an earlier talk in October, thanks to support from the Dean of the Humanities, the Columbia Global Centers, and the Henry Luce Foundation.

Introducing the two speakers, Abu-Lughod complimented their shared ability to bridge the divide between scholarship and activism.

Dina Siddiqi, Professor of Anthropology, BRAC University, presenting on “Child Marriage and the Feminist Imagination,” attested to the struggle feminists in the developing world face as they grapple with forces competing with any commitments to local contexts and concerns.

“How do progressive feminists in a place like Bangladesh—deeply transnational yet geopolitically marginal—negotiate the complexities of neoliberal donor and corporate agendas, developmentalist state imperatives, geopolitical securitization frames, and calls to global feminist unity?” said Siddiqi. “What kind of agency is possible when feminism itself has been governmentalized?” she challenged her listeners.

Nacira Guénif-Souilamas, Professor of Education Sciences, University of Paris 8 Vincennes-Saint-Denis, approached the question of religion and gender violence through the problem of foundational inequality in French and European polities.

“The skin color fiction, the sexual deviance of Arab youths, or the gendering of the ‘other’ religion, are objectifications of normative rules that limit the social possibilities of equal rights,” said Guénif-Souilamas. In such instances, social life is defined as a realm of equality because it is always already racially indexed,” she asserted as she presented on “Restrained Equality: A Sexualized and Gendered Color line.”

The event concluded with a lively Q & A that featured questions on topics ranging from the future of neoliberalism to laïcite and the banning of the veil in French schools to the framing of critical feminism.

Photos from this event are available here.