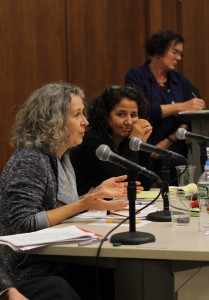 “Over the last few decades Violence Against Women (VAW) and, increasingly, Gender Based Violence (GBV), have come to prominence as sites for activism,” explained Lila Abu-Lughod, Joseph L. Buttenwieser Professor of Social Science and Co-Director of the CSSD project on “Religion and the Global Framing of Gender Violence.”

In her introductory remarks to “Is Gender Violence Governable? A Panel on International Feminist Regulation,” Abu-Lughod asked “ How can we engage critically with the terms, assumptions, funding streams, policies, and politics that have underwritten this unprecedented outpouring of attention? What is left out when problems both in war and in peace are framed in particular ways that become a kind of common sense? And whose interests are served by such framings?”

The event at Columbia University offered compelling responses to many of Abu-Lughod’s questions. Inaugurating a two-year initiative on Reframing Gendered Violence headed up by the Women Creating Change project at the Center for the Study of Social Difference, the discussion was co-sponsored by the Dean of the Humanities, the Columbia Global Centers, and the Henry Luce Foundation.

Dubravka Žarkov, Professor of Gender, Conflict & Development at the International Institute of Social Studies at The Hague, opened with a paper entitled “Feminist Politics, War Rapes, and Global Governance.” “What is ‘gender,’ and what does it mean in relation to wars and armed conflicts?” Žarkov asked audience members as a lead-in to her critique of Western feminism’s vexed treatment of war crimes and gendered violence.

Tracing the historical elevation of war rape to the position of ultimate violence against women, Žarkov worried that UN resolutions such as 1325 (2000) have enabled the resurgence of colonialist narratives about victims and savages. “Can we really claim that all this injustice is perpetuated against our will?” she challenged her listeners.

Rema Hammami, Professor of Anthropology at Birzeit University, discussed related themes in fieldwork conducted in the West Bank and Gaza Strip. Like Žarkov, Hammami interrogated the effects of UN Resolution 1325. In Palestine, she explained, the resolution encouraged practices of data collection and statistical analysis that disproportionately revealed forms of violence enacted against women, while obscuring the more pervasive violence of settler colonialism.

Janet Halley, Royall Professor of Law at Harvard University opened a Q & A sesssion by highlighting Žarkov’s and Hammami’s shared insistence on bringing feminist critical capacities to bear on the relatively new involvement of feminists in systems of international law and governance. She fielded insightful questions on topics ranging from methods of data collection to the misleading packaging of gender equality initiatives as projects on Violence Against Women.

The conversation continues on Thursday, November 3, with presentations by Professors Dina Siddiqi and Nacira Guénif-Souilamas on “Framing Religion and Gender Violence: Beyond the Muslim Question.”

See photos from the discussion here.