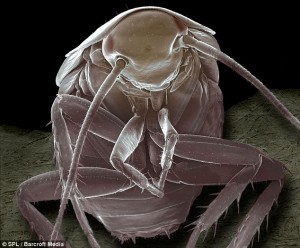 In early 2015 Shoshana Magnet, associate professor at the Institute of Feminist and Gender Studies at the University of Ottawa, came to speak to CSSD’s working group on Science and Social Difference about her feminist analysis of recent scientific inquiry into mixed societies of robots and insects.

Magnet, co editor of the text Feminist Surveillance Studies, discussed the field of biomimetics, where entomologists, roboticists, zoologists, and engineers analyze the natural world for guidance in solving problems. One such study by an interdisciplinary team examined robot-insect societies and how those subjects’ interactions shape intelligence.

The Leurre Research group examined American Cockroaches living with robots coated in cockroach pheromones, finding that the cockroaches eventually began to follow marked robots into shelters they would not have ordinarily selected on their own. Thus, robots became integrated into the decision-making process of the cockroach society.

Although the results were interesting, Magnet found that the scientists selected only male cockroaches for their study, claiming that the presence of females would produce sexual behaviors that might mar the experiment results. According to Magnet this portrayal of “compulsory heterosexuality” in insect behavior and elsewhere is erroneous, as many animals, insects, and cockroaches participate in same-sex courtship. The scientists also excluded cockroaches with disabilities from the studies, prompting Magnet to consider the greater implications of studies that are heteronormative and ableist.

Magnet grounded her research in the feminist scientific philosopher Donna Haraway’s theory that species are really webs of relationships rather than distinct entities and that scientific research should be conducted as a relationship that involves interaction. This “dance of relating,” as Haraway describes it, acknowledges the impossibility of a pure form of observation. Magnet also referenced physicist Karen Barad, who claims that a truly ethical research method requires that scientists must have an ethical relationship with the objects they study and that it must be imbued with a sense of scientific responsibility.

Magnet asked “What are the ethical implications of a scientific practice that claims to be able to eliminate queers, females, and those with disabilities?” She concluded that the Leurre experiments studied animal communications only as a means to better understand and facilitate social control in diverse human societies. In the words of the scientists, “We hope these experiments will enable the possibility to control such mixed societies.”

Magnet claimed that this irresponsible approach elides the rich possibilities of studying collective decision-making and that the gendered, sexualized, and able-bodied limitations on such research foregoes conclusions that might help disabled people or non-heterosexual people. Additionally, it would be useful to consider robot-cockroach relationships as a version of queer or “chosen” family, she said. This speaks to the recognition that kinship is a social and cultural matter, rather than a biological or natural fact.

Magnet concluded with the insight that during our current era of broad-based social movements characterized by collective forms of communication, studies such as the Leurre research are troubling because they ignore the possibility of diverse, mixed societies as sites for collective action in favor of focusing on communication that seeks to control cultural change while purging bodies of difference.