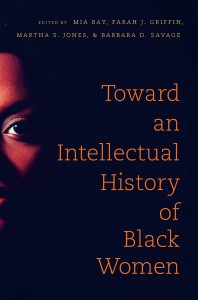 Toward an Intellectual History of Black Women, edited by Farah J. Griffin, co-director of the CSSD working group of the same name and Professor of English and African-American Studies at Columbia University, has been published by University of North Carolina Press.  Professor Griffin’s project co-directors Mia E. Bay (Rutgers University), Martha S. Jones (University of Michigan), and Barbara D. Savage (University of Pennsylvania) also co-edited the volume of essays in a passionate collective effort that spanned nine years.

dited volume presents the work of black women writers, educators, activists, religious leaders, and social reformers in the United States, Africa, and the Caribbean. Recovering the contributions of thinkers marginalized by both their race and their gender, the 15 essays collected in Toward an Intellectual History of Black Women uncover the ideas of both formally educated and self-taught thinkers.

CSSD hosted one of four meetings held to foster discussion and criticism of the commissioned essays by colleagues and graduate students. Ultimately, the scholars planned to move intellectual inquiry “beyond the ‘Great Men’ paradigm” and lift up Black women’s own intellectual achievements. The published result is an innovative volume that addresses topics ranging from religion and slavery to the politicized and gendered reappraisal of the black female body in contemporary culture.

The book is featured in the May issue of Essence Magazine and on the University of Pennsylvania and University of Michigan websites. Copies can be purchased here.