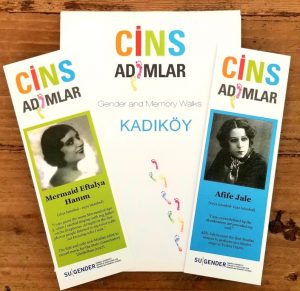 March 8, International Women’s Day, marks a global moment when feminists walk, chant, sing, and dance together in celebration of the transformative power of solidarity and collective action. In 2020, Istanbul is witnessing a new version of this celebration in the form of a “women’s run” organized by the sports section of the Istanbul Municipality, which recently changed hands into feminist-friendly leadership. Dark times call for creative politics: with feminist marches and other forms of political demonstrations in urban public space being suppressed by the government, women will run on a feminist path! And, much to our delight, the path of this women’s run has partially been inspired by the Curious Steps: Gender and Memory Walks of Istanbul.

Feminists inspire each other! A group of us took our first steps toward designing Istanbul’s first feminist memory walk as part of our preparation for the Women Mobilizing Memory working group meeting in September 2014. Inspired by the feminist tour of Budapest (organized by the historian Andrea Petö of Central European University); the feminist walk of Bochum (hosted by Linda Unger of the feminist archive collective ausZeiten); and the informal memory walk that Soledad Falabella offered the Women Mobilizing Memory group in Santiago, Chile, in 2013, a group of us at SU Gender (Sabancı University Gender and Women’s Studies Center of Excellence) came together to imagine what it would mean to walk the streets of Istanbul with feminist curious steps. Another source of inspiration was the Militourism festival (2004–2006), organized by an antimilitarist group of conscientious objectors (including women objectors), drawing attention to the “militarist” sites of Istanbul, Ankara, and Izmir with creative “antimilitarist” performances. With decades of feminist scholarship on women’s history writing and the amazing (online) Women’s Museum Istanbul, which brought to light the complex intersectional layers of Istanbul’s gendered history, we felt well equipped to take our first steps in exploring the possibilities of feminist and queer re-rootings in our beloved city. At a time when we felt “uprooted,” with bombs exploding and the democratic space shrinking, exploring our feminist and queer roots as resources of inspiration and empowerment, and doing so through collective walking and storytelling, felt healing and transformative.

In our contribution to the volume Women Mobilizing Memory, my coauthors, Bürge Abiral, Dilara Çalışkan, and Armanc Yıldız, and I argue that a feminist city walk offers the possibility to engage in “situated feminist storytelling” for mobilizing silenced memories, on the one hand, and making visible creative mobilizations of memory, on the other. Currently organized in three Istanbul neighborhoods, Curious Steps brings together diverse groups of people for collective walks through streets and sites that come to new life with hidden women’s and LGBTI+ stories, unmarked on site but researched and creatively told by young volunteers. As such, the walks enact what Cynthia Enloe calls “feminist curiosity” in urban space with an ever-growing and ever-changing repertoire of stories that merge public and intimate archives.

After five years of walking in small groups, it is very exciting that we will soon be running with thousands of women to collectively witness some of these sites and stories of struggle along the path of the March 8 women’s run in the Asian neighborhood of Kadıköy. Right where the Kadıköy Women’s Run will start this March 8, we have our first Curious Steps stop in front of the State Conservatory, marking the outstanding legacy of artist Mermaid Eftalya (Atanasia Yeorgiadu, 1891–1939) who sang fifty-six of the one hundred recordings of the State Conservatory published by Columbia Records in 1927, without a single one mentioning her (Greek) name. On the other side of the State Conservatory, by the City Theater, we stop again to remember Kınar Sıvacıyan (1876–1950), one of the leading theater artists of the late-Ottoman and early-Republican period, who performed in numerous plays in the Darülbedayi (the precursor of the State Theaters) and other theaters across Istanbul. Despite her fame in the 1910s and 1920s, the Armenian actor Kınar Sıvacıyan has since been written out of all historical records, including theater history texts, while her Muslim contemporaries, such as Muhsin Ertuğrul and, later, Afife Jale, are remembered through theaters and awards named after them.

Curious Steps in Kadıköy, January 2016 (hearing Kınar Sıvacıyan’s story with a play on Afife Jale in the background)

Along the route of the Women’s Run another stop marks the Rexx Cinema, which used to house one of the oldest theaters in Kadıköy, the Apollon. This is where Afife Jale, the first Muslim woman actor to take public stage, performed her first plays. As we stop to talk about Afife Jale’s breaking all gender norms with her passion for theater and performance and facing serious challenges from her own family and the police, we also explore the intersectional layers of her struggle. In our narration, the story of Kınar Sıvacıyan’s helping Afife escape from the police, who regularly raided the theater upon receiving complaints that a Muslim woman was on stage, is a story of women’s solidarity in the background of ethnicized, patriarchal nationalism.

Another site of feminist and queer solidarity along the run is Yoğurtçu Park. Here, our Curious Steps stories focus on the significance of the park for feminist and LGBTI+ histories of activism, focusing particularly on the first march against domestic violence in 1987, after which the first women’s shelters were established, and the ongoing weekly Yoğurtçu Women’s Forum, a vibrant site of feminist debate and exchange since the Gezi protests of 2013.

“Even in the darkest of times,” Hannah Arendt wrote, “we have the right to expect some illumination.” These are certainly dark times for Turkey, and the planet at large. Yet it is also a time in which we are witnessing new forms of creative, life-enhancing, transformative politics everywhere. From Black Lives Matter, which has shaken up the “normalcy” of white privilege and supremacy through an intersectional lens rooted in feminist and queer politics, to the global #metoo movement that is challenging the systematic workings of masculinist privilege and from the mass demonstrations of women in India cutting across religious, ethnic and caste lines to the viral Las Tesis movement against sexual violence and impunity initiated by women in Chile, we are facing a time of revolutionary reimaginings of gender and sexuality everywhere. The Kadıköy Women’s Run is only one among many March 8 activities planned in Istanbul this year, but a particularly inspiring one in the connections it is establishing with the city’s rich history of feminist activism. When feminist activism meets imaginative memory politics, new histories are made! And, as the Women Mobilizing Memory volume shows with many inspiring examples, they are being made everywhere.

As we walk, dance and run this March 8 in Istanbul, it’s heartening to know that millions across the globe will be coming together on International Women’s Day, and throughout Women’s History Month, illuminating these dark times with feminist activism and wisdom. 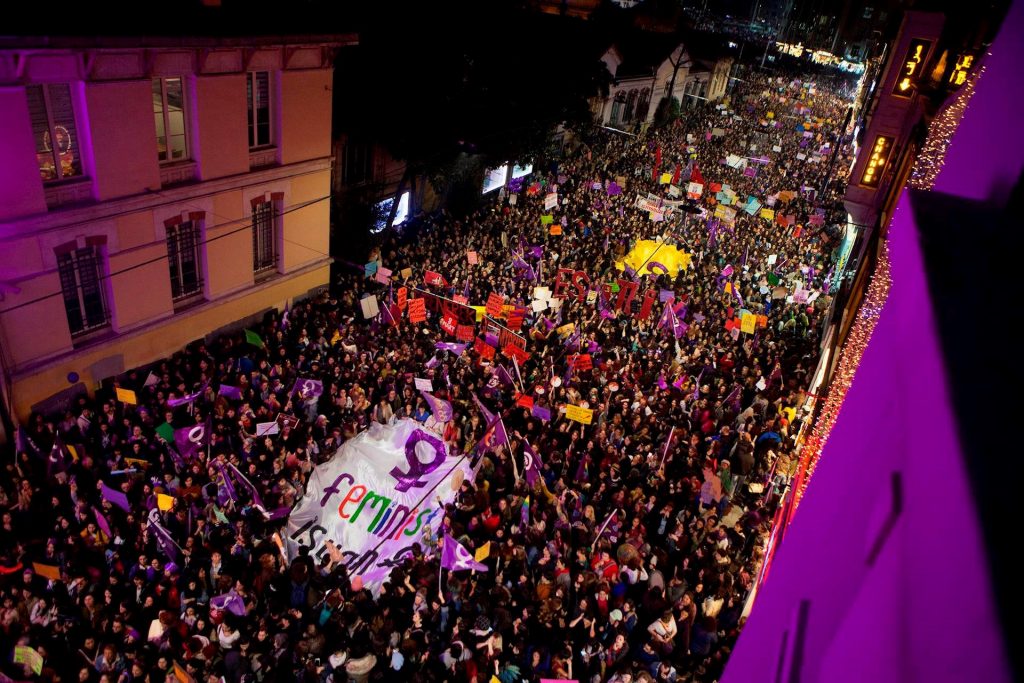 * Ayşe Gül Altınay is professor of anthropology at Sabancı University, former director of SU Gender (Sabancı University Gender and Women’s Studies Center of Excellence), and coeditor (with Maria Jose Contreras, Marianne Hirsch, Jean Howard, Banu Karaca, and Alisa Solomon) of Women Mobilizing Memory (Columbia University Press, 2019). The book, a transnational exploration of the intersection of feminism, history, and memory, shows how the recollection of violent histories can generate possibilities for progressive futures. It emerges from a multiyear feminist collaboration bringing together an interdisciplinary group of scholars, artists, and activists.

Note: This blog post was written before the killing of at least 36 Turkish soldiers in a massive attack near Idlib, Syria on February 28, and Turkey opening its borders soon after to allow refugees and migrants to pass, which has created a devastating humanitarian crisis at the borders and the Aegean Sea with Greek and Bulgarian authorities not allowing passage and suspending asylum applications. After the recent announcement from the Governorship of Istanbul that all political actions and demonstrations “against war” are banned until March 10th, it is not clear which March 8 activities will take place, and how they will be received by the security forces.