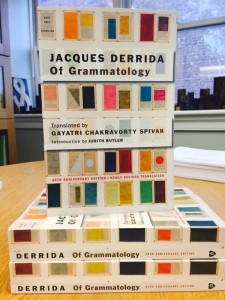 Gayatri Chakravorty Spivak, director of CSSD’s working group on “The Rural-Urban Interface: Gender and Poverty in Ghana and Kenya, Statistics and Stories” and Columbia University Professor in the Humanities, retranslated the recently published fortieth anniversary edition of Jacques Derrida’s Of Grammatology, the seminal text on deconstruction.

The new translation boasts a greater awareness of Derrida’s legacy and also includes a new afterword by Spivak and an introduction by Judith Butler, former director of the CSSD working group on Rethinking Vulnerability and Resistance: Feminism and Social Change and Hannah Arendt Chair at the European Graduate School.

At the time of the book’s original publication, Dennis Donoghue wrote in the New Republic, “There is cause for rejoicing in the translation of De la grammatologie.”