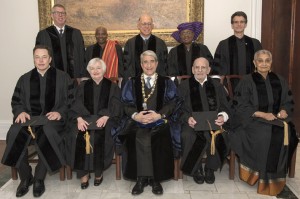 Gayatri Chakravorty Spivak, Director of the CSSD working group Rural-Urban Interface: Gender and Poverty in Ghana and Kenya, received an Honorary Doctorate in the Humanities from Yale University.

Spivak is a University Professor at Columbia and a founding member of the Institute for Comparative Literature and Society. The Rural-Urban Interface project researches the narratives of populations who migrate from the countrysides of Ghana and Kenya to those countries’ urban centers and focuses on the feminization of poverty.