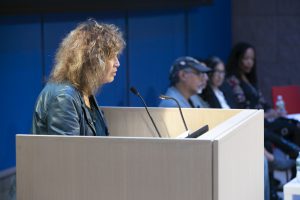 The following is the prelude by Carol Becker (Dean of the School of the Arts at Columbia) to the roundtable discussion “Arts of Intervention” at the anniversary conference of the Center for the Study of Social Difference (CSSD), “What We Can Do When There’s Nothing To Be Done: Strategies for Change,” which was held on September 28, 2018 at The Forum at Columbia University, New York, New York:

Artists live in the world as citizen guides and witnesses, carefully charting human and social complexity. Because they pay close attention to evolving subtleties of the species and the natural environment, they have a deep commitment to reflecting and affecting the contemporary understanding of our condition. Their work often predicts what is to come, not because artists are unusually prescient but because they live intensely in the present—observing, responding, and contemplating. As a result, their work often gestures to the urgency of issues manifesting in the moment, threatening the species and the planet now and in the future. What does it mean to look closely, to listen seriously, to notice what others might not, and then to question unrelentingly what you are seeing and hearing?

As intensely as artists monitor the present reality, they also cultivate their imaginations. Therefore, they see the possibilities of potential systems of thought that do not as yet exist––the ways in which the world could be different and better for all living creatures. Thus artists tend to align with those in the progressive arena who imagine a world moving toward a greater good, one without inequity and oppression.

And because artists are deeply committed to personal freedom of expression as a basic right, they also tend to be irreverent and, at times, defiant against that which feels overly institutionalized and restrictive. Because of their commitment to the imagination, artists start with the premise that all that stands in the way of human freedom and well-being can be and should be rethought, rebuilt, and rearranged. Or, as poet Terrance Hayes writes in his poem “For Brothers of the Dragon,” “Why was the imagination invented, if not to remake?”

And as specific as art might be to a particular moment, culture, and conflict, when it goes deep enough into the uniqueness of a situation, it inevitably touches something bigger than itself that incorporates difference and moves us simultaneously to an understanding of our shared humanity. This understanding is very significant, because when we refuse to acknowledge our collective humanness, we then are able to objectify others. The more capable of objectification we are, the less likely we are to exercise compassion or understanding or to engage in humane action for all.

If successful, art is experiential, eliciting a sensorial or emotional response. Even when abstract, issue oriented, or functional, its unique form allows the work to reason with our sensibilities, to make us understand the world through our bodies as well as through our minds.

Within this framework of lived experience are the stories we tell each other about our lives. Getting to common ground—without ignoring, depleting, and denying the inevitable differences of history, culture, and ideology—is the consequence of negotiating form, something that artists understand very well. Artists are able to use technique, technology, and skill to contain this complexity of human experience, whether within the structure of a play, a novel, a poem, or a memoir; within the visual conceits of painting, sculpture, performance, installation, or intervention; within the myriad forms of musical composition, sound art, theater, dance, or the range of filmic structures; or within the new possible forms afforded by evolving digital innovation. All allow us to contain the shared depth, breadth, complexity of emotion, desire, lived lives, successes, and failures of the species. Rarely does someone create artwork to hide it in a drawer. Art for the most part is made to exist in the public sphere––to be read, heard, seen, sung, experienced, and shared with as large an audience as possible. As such, it is always a public statement made to communicate, to stir up, to elicit emotion, to provoke clear thinking, and, at times, to solve a specific problem.

Artists and designers increasingly define their process by what has been called social practice: the desire and ability to intervene in the public sphere. These practitioners have been in the vanguard of helping to make visible such issues as race, class, gender, migration, social justice, public concerns with Big Data, the reemergence of fascism, and Climate Change.

Working across forms, these four artists, writers, thinkers, and practitioners—Ricardo Dominguez, Sama Alshaibi, Miya Masaoka, and Saidiya Hartman—manifest aspects of such intentions. In their own ways, they each tackle complex social issues, utilizing advanced technologies as well as the most originary forms of narrative to situate the human voice in particular landscapes.

Thinking through art is a utopian process. Once art is in the public sphere, its ideas slowly become recognizable and acceptable, as they wait for the time when thought can manifest in action. In this sense, art, which is the result of great passion and urgency, also integrates patience and duration.