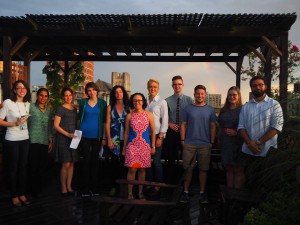 On September 15, the Precision Medicine: Ethics, Politics, and Culture working group kicked off its first semester with a talk by James Tabery, Professor of Philosophy and Medicine at the University of Utah.

Tabery’s talk on “Collins’ Cohort: The Path from The Human Genome Project to the Precision Medicine Initiative” provided historical perspective on the Precision Medicine Initiative (PMI) announced by President Obama in his 2015 State of the Union address, a plan to recruit a cohort of 1,000,000 or more American volunteers to provide biological, environmental, and health information over an extended period of time.

At the time, Tabery explained, the proposal made headlines because of its ambitious scope and exciting medical promise. The idea, however, was not a new one. As the Human Genome Project was wrapping up in 2003, the director of the National Human Genome Research Institute sought to set the NIH off on another bold genetic initiative—to create a large, longitudinal, national cohort that would allow for examining the genetic and environmental contributions to health and disease. The path from that initial idea in 2003 to the public announcement at the State of the Union address in 2015 was marked by technological advances, logistical challenges, ethical dilemmas, and political hurdles. That historical legacy also reveals a great deal about what we can expect (and not expect) from the Precision Medicine Initiative.

Tabery reviewed the history of successes and failures among previous initiatives such as the American Family Study, The American Genes-Environment Study, and the Genes, Environment, and Health Initiative. With the 2015 State of the Union address, he explained, the dream of Frances Collin, director of the NIH, was realized. The PMI would seek to enroll 1 million people in a cohort reflecting the diversity of the US population, with the goal of creating personalized clinical care based on genes, environment, and lifestyle. It would aim to provide personalized, clinical care for both rare and common disorders, as well as learning about what makes people healthy.

Some of the worries about PMI are unfounded, according to Tabery. Although many worry that the PMI is moving too fast, history tells us that it is the product of over a decade of thought. And although some also worry that the PMI will fail in its goal to recruit a million subjects, Tabery claims that Collins will deliver.

A more serious concern regards what it would mean for the PMI to succeed. Since the PMI is really concerned with genetic, there is a lot of talk about the environmental factors that cause disease but little attention to specifics. Since other countries are already doing these kinds of studies, some ask why the United States should replicate their work? And finally, Tabery wondered whether the sample collected will really be representative.

Tabery closed by reminding his audience that the PMI is a work-in-progress. Given that Columbia is one of the enrollment centers, this is an exciting time to be thinking about the questions raised and to witness, on the ground, how they are addressed.

Photo above is of members of the Precision Medicine: Ethics, Politics, and Culture working group.