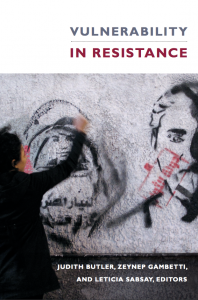 The volume Vulnerability in Resistance, which grew out of the workshop “Rethinking Vulnerability and Resistance: Feminism and Social Change” that took place at Columbia’s Global Center in Istanbul in 2013, has been published by Duke University Press.  The introduction to the volume is available here, free of charge.

In the introduction, the editors write that vulnerability and resistance have often been seen as opposites, with the assumption that vulnerability requires protection and the strengthening of paternalistic power at the expense of collective resistance. The book examines political movements in Turkey, Palestine, France, and the former Yugoslavia, articulating an understanding of the role of vulnerability in practices of resistance. The essays offer a feminist account of political agency and consider how vulnerability is constructed, invoked, and mobilized within neoliberal discourse, the politics of war, and resistance to authority, in LGBTQI struggles, and in the resistance to occupation and colonial violence.