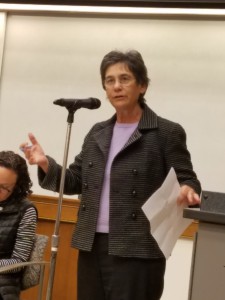 On March 23rd, CSSD presented its 2017 Keywords Roundtable Discussion featuring panelists from various departmental homes who discussed definitions of the word “justice.” Rachel Adams, Professor of English and Comparative Literature, Columbia University and Director, Center for the Study of Social Difference introduced the group and commented on the challenges the new presidential administration presented to minority groups like people of color and the LGBT community, calling into question the U.S. government’s commitment to social problems and inequality.

Adams said that for people with disabilities, the legal definition of “justice”—the administration of fairness—posed a problem because the definition for “fairness” varies for those with disabilities. The American democratic social contract does not by nature take into account people whose bodies deviate dramatically from the norm or who might possess different capabilities for autonomy or reasoning, she said.

“Are there ways to revise that definition or are these individuals an add-on to those theories?” asked Adams, pointing out that some minority groups like the disabled need much more assistance in claiming their rights.

Adams said that while the new administration’s threats to the Affordable Care Act, Medicaid, and education all impacted justice for people with disabilities, the surge in public protests also presented problems for those individuals because of their difficulties with mobility, crowds, marching, and speaking. She concluded with a call for “activism for justice when you don’t have a body for protest.”

Kathryn Kolbert, Director of the Athena Center for Leadership, Barnard College, examined “justice” through the lens of U.S. constitutional law, saying that the Constitution provided “multiple and overlapping guarantees” of justice with legal protections of free speech and press; due process and equal protection; and the protection of liberty. While the Trump Administration threatens all of those freedoms, vigilance against incursions against them by any governmental agent is always necessary, she said.

Kolbert said there were four prerequisites that underpin the notion of American justice and all of them are currently being challenged. First, the system of governmental checks and balances keeps political powers in the three branches separate so they won’t unduly influence the administration of justice. “Today they are totally out of alignment,” said Kolbert, citing the Republican domination of the House and Senate as an example.

Kolbert said civil debate was the second guarantee of justice and that the lack of it in current U.S. politics was problematic. Freedom of speech and the press were also crucial measures that were in danger, according to Kolbert, who claimed that “Americans are totally divided over what facts are and over a common set of measurements for determining what is effective,” she said.

The fourth prerequisite for justice that Kolbert cited was access, which is currently being undermined by the huge income disparities within our society. “The gap between the haves and have nots is now so pronounced that one’s access to freedom and institutions of civil society are defined solely by one’s economic status,” she said, citing healthcare as a classic example.

Carla Shedd, Assistant Professor of Sociology, Columbia University presented herself as an urban sociologist who is intrigued by the power public institutions have over people’s lives.

Shedd described the awesome power within the concept of parens patriae—the legal framework through which the state acts as the surrogate parent for its citizens and through which governmental actors are allowed to intervene in the lives of individuals (particularly those in juvenile court) and their families with the ultimate goal of building better citizens.

She also explained the phrase “carceral continuum” a term she uses to describe the expanding systems of social control and punishment that are experienced at different levels of severity according to one’s social status. She said her work explored how societal structures such as neighborhoods, schools, and courts unjustly shape the trajectory of young people’s lives.

“Steeped in the language of justice, and often in the name of protecting America’s poor and vulnerable, the nurturing arm of the state may also operate like an instrument of punishment,” said Shedd. She explained that the institutions mentioned earlier are often used to distribute criminal justice unequally, with racially subordinated groups receiving a disproportionate amount of the carceral system’s punishments.

Jennifer Wenzel, Associate Professor of English and Comparative Literature and Middle Eastern, South Asian, and African Studies, Columbia University, discussed her work on justice in relation to the environment and climate.

“Environmental justice…is concerned primarily with environmental racism and the toxic burdens borne disproportionately by racialized minorities,” said Wenzel, explaining that current theorists posit the socially marginalized as receiving few environmental benefits like natural resources but receiving more environmental burdens like pollution. The case is similar with climate change, in which the industrialized Global North is responsible for the production of most of the greenhouse gases on the planet but the most severe effects of climate change are felt in the Global South, she said.

Even in the very definition of environmental justice, hegemonic values and conceptualizations of nature also inform the discussion. Thus, mainstream environmental movements in the Northern hemisphere set the norms, eclipsing the actual, specific environmental concerns of those who are suffering environmental fallout in the Global South.

In conclusion, Wenzel called for an “environmentalism of the poor” that would demand a healthy environment for everyone, not just the poor, and said that “One of my concerns as a scholar-citizen is that this newfound interest in geological stratification threatens to displace attention to social stratification.” Overwhelming concerns about future dystopias that currently dominate mainstream dialogues could displace a more practical focus on present injustices and inequalities affecting people now, she said.

Photos from the roundtable discussion are available here.