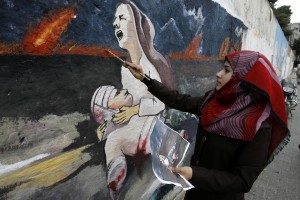 CSSD is housing a new three-year initiative on “Religion and the Global Framing of Gender Violence,” to be co-directed by Professor Lila Abu-Lughod (Institute for Research on Women, Gender, and Sexuality/Anthropology). Launched with a grant from the Henry Luce Foundation, this project will bring together an international community of scholars, experts, journalists, and activists to study the role of religion in naming, framing, and governing gendered violence, with a special focus on the Middle East and South Asia.

Over the past couple of decades, concerns about violence against women (VAW)––and the more expansive “gender-based violence” (GBV)–– have become prominent and highly visible in a range of local, national, and global agendas. By embedding gender violence in a complex matrix of international norms, legal sanctions, and humanitarian aid, the anti-VAW movement has achieved a powerful international “common sense” measure for defining and attending to violence against women in developing countries, particularly during conflict situations. The adverse effect has been to detach victims from their full contexts when determining what counts as VAW and how it should be addressed.

“A concern for women in war too often prioritizes their rape over their death,” explains project co-director Nadera Shalhoub-Kevorkian, who also serves as the Director of the Gender Studies Program at Mada Al-Carmel – Arab Center for Applied Research in Haifa. “This narrowing of VAW to attacks on women’s bodily integrity excludes economic, political and structural forms of violence, thereby leaving women’s calls for safe homes, safe public spaces, and stable governments unheeded.”

Abu-Lughod notes that religious traditions and institutions are regularly linked to VAW (whether as explanations or solutions) through media representations, by national governments, and in international governance and yet there is very little examination of the terms under which those linkages occur.

“The most infamous example of the conflation of religion and VAW for geo-political ends was the Bush II administration’s use of Afghani women’s suffering at the hands of the Taliban as a part of its casus belli with Afghanistan,” explains Rema Hammami, another co-director of the project, who is based at the Institute of Women’s Studies at Birzeit University in Palestine. “Yet, the VAW agenda also operates in less dramatic ways. In the Palestinian context, the global VAW agenda has become one measure that global institutions are using to assess the Palestinian leadership’s ethical capacity for statehood.”

The CSSD initiative opens a critical global conversation on religion and gender violence, with the conviction that more nuanced analyses could lead to more effective ways to meet women’s and men’s actual needs and circumstances in different national contexts.

Janet Jakobsen, a Barnard College co-director of the research group adds, “We will work with journalists and writers to transform some of the ‘common sense’ stories about VAW/GBV.” A fellowship competition for journalists who report on global issues related to gender violence will open in October.

“It is urgent that feminist scholars and practitioners in diverse global locations learn from each other not just about strategies or policies for decreasing violence, but also about the ways that framing problems in certain ways may cloud the very diagnoses that are so essential to treating human suffering,” says Abu-Lughod.

The initiative will launch this fall with two public panels featuring feminist scholars from Bangladesh, France, Palestine, and the Netherlands speaking on two themes: “Is Violence Against Women Governable?” (October 13) and “Beyond the Muslim Question” (November 3).