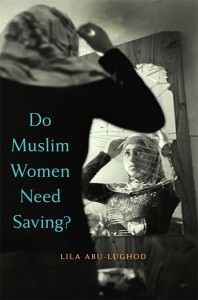 Volpp remarked that Abu-Lughod’s book is “a great service to those of us who have long wanted for a resource we can recommend to explain why Muslim women do not need saving” and that it “works hard not to alienate the skeptical reader.”

The book provides a multi-faceted examination of the Western obsession with constraint and choice that is borne out of the misplaced imposition of the Enlightenment ideals of freedom and autonomy on Muslim women, according to Volpp.

“The presumption of those who would save Muslim women from their unfreedom is that identification with Islam can only be a negative experience and that they are being saved to a more ideal alternative,” writes Volpp.  That Western alternative is usually identified with “human rights, liberal democracy, and modern beauty regimes” even though not all women seek this identical life, according to Volpp’s reading of Abu-Lughod.

Abu-Lughod asserts that the subjugated Muslim woman motif can be politically useful to Western states.  She also feels that defining women’s rights as human rights assumes the presence of a liberal democracy and in fact acts as a “strategic diversion” for troubled social movements in the global North. Both of these applications leave out the geopolitical and historical realities that forcefully shape Muslim women’s lives, writes Volpp.