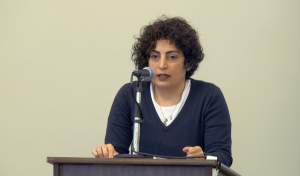 “In recent days, we’ve seen the supposed prevalence of violence against women in Muslim countries used to justify travel bans and immigration prohibitions,” remarked Jean Howard, George Delacorte Professor in the Humanities, as she introduced Refugees and Gender Violence: Media and the Arts, the latest event in a two-year series on Reframing Gendered Violence, co-sponsored by the Center for the Study of Social Difference, and the Dean of the Humanities.

The unsatisfactory state of affairs noted by Howard inspired the panel’s questions about how journalists and photographers can vivify the precarious realties of refugees, reframing conventional narratives to tell stories that disrupt our clichéd understandings of gendered violence.

A photojournalist based in Istanbul, Bikem Ekberzade spoke to this question in her wide-ranging, revealing presentation, entitled “The Refugee Project: Anatomizing Gendered Violence.” Showing photographs of forced migrations in forgotten conflict zones such as Kosovo and Afghanistan, she illustrated the stories of women stranded midway through their journeys toward refuge and the hope of a better life.

Sarah Stillman, a staff writer for The New Yorker and the Director of the Global Migration Project at Columbia School of Journalism, spoke thoughtfully on the ways that narrative can affect our understanding of gendered violence against refugees. “How can we resist binaries in storytelling, which distinguish between ‘worthy’ and ‘unworthy’ victims?” she asked. “When I think about reporting on gender-based violence in this context, one of the most critical things is to show people in the act of being creative, or loving. That has really stuck with me when I think about the families I’ve gotten to know in the context of my reporting.”

Susan Meiselas, president of the Magnum Foundation and author of acclaimed books such as Carnival Strippers and Nicaragua, built on the themes of the two previous speakers, detailing the challenges and discoveries of her latest project, A Room of Their Own. This collaborative endeavor uses photos, testimonies, and original artwork to document the experiences of women in a haven in the United Kingdom. Of her experience working on the product, she explained, “this is hard…I am making something with, and in some ways for, these women…I am trying to tell a story that is fairly complex, building a path for readers to hopefully care about a place they might not be anywhere near. Can what I’m making help sustain the haven?”

The event concluded with a lively Q & A that featured questions on topics ranging from the practical benefits of artistic intervention to the narrative ethics of the journalistic profession. The conversation will continue next year with segments on gendered urbanisms and the gender of global climate change.

Access photos from the discussion here and videos here.