LECTURE: Ron Suskind on “Narratives of Earned Hope: Or the Ways Adversity Can Build Compensatory Strengths” 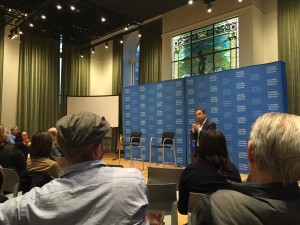 Speaking on Wednesday, March 25th before an audience sponsored by the Center for the Study of Social Difference’s Future of Disability Studies workshop, Ron Suskind shared his story about pursuing a demanding career in investigative journalism while raising his autistic son Owen. Whether explaining socio-economics in the inner-city, public policy, or his own family, Suskind argued that adversity was a necessary precondition in order to produce insightful journalism.

Suskind won the Pulitzer Prize for Feature Writing in 1995 after publishing a series of articles that became his first book A Hope in the Unseen. The book describes the life of Cedric Jennings, who grew up in inner city Washington, DC before attending Brown University. Suskind followed with three books about the George W. Bush administration’s planning for the Iraq War, their post-9/11 intelligence activities, and their response to the 2007-2008 financial crisis.

To write about Owen in Life, Animated, however, Suskind wrestled with how to treat his family with the same tough standards that won him wide acclaim for his previous reporting. Suskind employed many of the same methods when interviewing his wife Cornelia, their eldest son Walter, and Owen himself, who now lives independently of his family.

When Owen was first born, his family noticed that he did not exhibit the same interpersonal skills—namely eye contact—that most children acquired by his age. Only after the family sat down to watch The Little Mermaid did Owen sustain eye contact with them. This observation led Suskind and Cornelia to use the personas of Disney characters to communicate with Owen.

One evening, after Suskind and Cornelia put Owen to bed, Suskind snuck into Owen’s bedroom with a puppet of Genie from the movie Aladdin. When he popped up from underneath Owen’s bedspread with Genie, Owen had his first extended conversation with his father for the very first time.

Knowing that Disney films would enable Owen to speak about his feelings, Suskind and his family watched hundreds of hours as the basis for dialogue.

Today, Owen is working with filmmaker Roger Williams to produce a documentary about A Life, Animated.

While writing about his family for a public audience was difficult, Suskind argued that journalism was capable of conveying both the joy and pain of family life and especially for families living with disability. While interviewing his family members revealed painful memories, it was also a therapeutic process. Suskind exhorted the audience of journalists and scholars to “seek the jewel.” He concluded, “Human beings are not cardboard cutouts. We all have a heart and a soul.”

Interviewing his family forced them to remember a past when Owen’s condition was opaque, but the process of narrating their journey helped place their present-day triumphs in a larger context of “earned hope.” For families with disability, Suskind’s Life, Animated serves as a template for how to help others understand disability through personal narrative.

Contributed by George Aumoithe, Graduate Assistant, Center for the Study of Social Difference

Image of Ron Suskind in the World Room at Pulitzer Hall at Columbia University in the City of New York, 2015, by George Aumoithe.