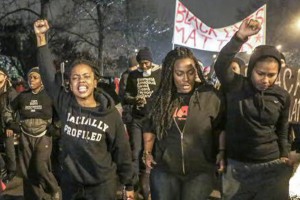 CSSD’s Women Mobilizing Memory working group met in late February to discuss, in a comparative perspective, the links between memory and activism and between memory practices and movements promoting human rights. Examining current protest movements in the wake of the Arab Spring and Occupy Wall Street, members engaged in sustained debate about whether, and in what circumstances, such protests are useful in mobilizing people for sustained activist efforts at social transformation.

Among the aesthetic tools that might mobilize memory for progressive social change are the digital arts and photography, performance, and media, each of which can have strong ties to human rights law and academic examinations of inequality and the systematic erasure of memory.

The group suggested that while street protest was perhaps the most visible venue of mobilization, it was often overly romanticized and could not be sustained indefinitely. Still, the action of individuals coming together to claim a civil space has proved to be a useful tool for fomenting social and political transformation, as we saw in the frequent civil rights and peace protests of the 1960’s and the massive anti-war demonstrations at the beginning of this century.

One student activist spoke of the current difficulties of using public space on the Columbia campus for unionizing, where the rules of institutional decorum did not permit such activity, deeming it “confrontational.” Breaking the rules, however, is indeed what gets social movements noticed.

The group agreed that holding a public space indefinitely was not necessary to make a protest effective, so long as the innovative ideas being discussed continued to circulate after the physical protest ends. A street protest might ultimately be ephemeral, but as the 2011 Occupy Wall Street movement demonstrated, one action could lead to a series of related actions. As with Occupy, the communication of a sustained message (“99%”) can spark social connections to recycle the message and use it for new forms of protest.

Istanbul’s Saturday Mothers of Galatasaray Square are an example of sustained, networked protest with earlier roots. These activists have appeared since 1995 bearing photos of their children who were most likely murdered by government security forces. Their work was in turn inspired by the Mothers of the Plaza de Mayo in Buenos Aires, women who since 1977 have mourned the disappearance of 30,000 individuals under Argentina’s dictatorship. Similar occurrences also take place in Mexico and Rwanda.

Similarly, many in the group claimed that the power of social media lies in the circulation of key phrases that act as an engine, generating an expanding desire for and a manifestation of change in the real world. Protesting the police murders of Michael Brown in Ferguson, Missouri and Eric Garner in Staten Island, New York this past year, activists throughout the country made phrases like #Ferguson, #icantbreathe, and #BlackLivesMatter go viral, leading to clashes with the police, freeway shutdowns, and other interventions. Risking arrest or violence was key in getting these events noticed.

While one member said that activism seems to have flatlined since 2011, since it lacked uniform goals and organization, another claimed, that on the contrary, many more students are now interested in course work around social change. It is important to remember that only a few years have passed since the events of the Arab Spring and Occupy, and that systemic social change requires much more time.