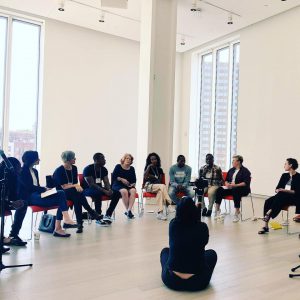 On Sunday September 30th 2018, the Center for New Narratives in Philosophy at Columbia University hosted its second Pedagogy of Dignity workshop at Columbia’s Lenfest Center for the Arts, in connection with the Pedagogies of Dignity working group at the Center for the Study of Social Difference. The workshop brought together 40 formerly incarcerated students, academics, prison educators, activists, undergraduates, and postgraduates, to discuss the benefits and challenges of prison education, present our pedagogical ideas, and prepare participants to teach in Brooklyn Metropolitan Detention Center (MDC).

Working with the educational staff at MDC, we have organized a series of mini-courses that are available to the men of MDC, regardless of educational background. Since February, over 140 incarcerated men have attended our courses. Each class is a combination of serious ideas, Theatre of the Oppressed exercises, and skill development. The mini-course program has been an enormous success. Our classes are over-enrolled and the MDC staff is eager for more courses.

Professor Christia Mercer hosted the event, Morgaine Gooding-Silverwood led Theatre of the Oppressed exercises and mock classes, and the award-winning documentary film maker, Jac Gares, filmed as part of her upcoming documentary on our Pedagogy of Dignity work, with videographer Isaac Scott. (The video is available here.)

Background
The issue that our Pedagogy of Dignity approach seeks to address is that many people – even well-intending volunteer teachers – assume that teaching in prison is like normal teaching, but with challenges. We reject this assumption. At the Pedagogy of Dignity workshop, we debated, analyzed, and tweaked our pedagogical approach that members of our group first developed at Taconic Correctional Facility and honed at Brooklyn Metropolitan Detention Center fall 2017.

The first idea underpinning our Pedagogy of Dignity is that the harsh realities of incarceration render less suitable the traditional classroom pedagogy according to which instructors transmit their knowledge to (mostly) passive learners. It has been our experience that incarcerated people — the vast majority of whom have been gravely underserved in schools — are best served when classroom work is broken up with improvisational exercises that employ Theatre of the Oppressed methods. Nearly 80% of incarcerated women suffered 1 physical abuse as children and 33% have survived rape. Roughly 75% of incarcerated people are functionally illiterate. Such students deserve an enlivened classroom experience that breaks down hierarchies and creates an environment that enables self-expression and its accompanying self- affirmation. 2

The second idea grounding our Pedagogy of Dignity is that incarcerated students do not need saving. Although prison culture forces inhabitants to endure oppressive rules and suffer injustices, imprisoned students are eager to take full advantage of the opportunities offered them and extremely resilient in supporting one another in doing so. Too many volunteer instructors have, what activists in our group call, “a savior complex.” In the words of one of our collaborators, Isaac Scott (formerly incarcerated artist, activist): “volunteers often see themselves as responsible to save their incarcerated students” in a way that “can cause more harm than good.” Instead of seeing incarcerated students as people who need saving, Scott insists that students be allowed “to empower themselves so as to restore their own self-image.” The main goal of our pedagogy is to create an environment in which students’ experiences and perspectives are respected and highlighted so that students can enrich their own sense of agency, discover that their experiences count as knowledge, and empower themselves. Theater of the Oppressed techniques were originally designed exactly to increase participants’ agency and accompanying sense of self-worth and dignity.

1 Developed by Augusto Boal, Theatre of the Oppressed includes “improvisation and other techniques to break down hierarchies and promote social and political change.” Boal’s goal was “to explore, show, analyze and transform the reality in which the participants are living.” 2 The lawyer of one of our students sent a letter in which he wrote: “I think [name of student] won’t mind me telling you that your course has significantly added meaning and purpose to his life in federal prison.”

Our Teaching in MDC
A subset of our group developed the Pedagogy of Dignity over four years of teaching in Taconic Correctional Facility and then had the opportunity to experiment with it in the Brooklyn Metropolitan Detention Center (MDC), which is a federal maximum security jail. Our course has been considered a huge success both by the students and by the educational staff at MDC. During a ceremony at the end of one semester, organized by Dr. Michelle Gantt (MDC, Director of Education), one student said: “I thought my brain had stopped working and would never work again. The reading, discussing, and [improvisational] work we’ve done, it’s proven to me that my brain still works. I’m ready to use it more.”

Dr. Gantt was so pleased by the course, some of which she observed, and by the student response, that she approached us to create a special program in MDC. Working in close collaboration with MDC staff, we have instituted a series of 4-week courses that have been made available to anyone in MDC, whether or not they have a high school degree. In an extraordinary gesture of trust, MDC has allowed us to train volunteers and escort them into this maximum-security prison without the normal rigorous screening. Each class has been a combination of serious ideas and texts, Theatre of the Oppressed exercises, and skill-development.

The Pedagogy of Dignity Workshop
At the workshop, Professor Christia Mercer and justice educator, activist, and theater artist Morgaine Gooding-Silverwood introduced the day, giving an overview of the MDC program, the Pedagogy of Dignity, and Theatre of the Oppressed exercises. Gooding-Silverwood said, “The purpose is to teach university professors to be more human and relaxed and nuanced in their approach to education in prison.” The approach is a means of raising professors’ awareness about the fact that there is no structure for rehabilitation for incarcerated students, that students in the classroom have a lot to teach professors, the importance of professors allowing themselves to be intellectually vulnerable in the prison classroom and open to learning from the students.

Theatre of the Oppressed is a form of community theatre created by Augusto Boal in Brazil based on the idea that anyone can be an actor, but also provides the foundation for important philosophical and social discussions. Theatre of the Oppressed is important because it encourages us to fail and to make mistakes. For example, one of the exercises “Name Gumbo” is where people switch names as they introduce themselves, and carry on their new name when they introduce themselves to the next person. It teaches us that we don’t listen very well.

Formerly incarcerated students Isaac Scott, Aisha Elliot, Syretta Wright, Miranda McConniughey, and Jarrell Daniels, and Brooklyn Public Defender Susannah Karlsson discussed the challenges, benefits, and goals of incarceration and education. Formerly incarcerated student Jarrell Daniels explains, “For us, education is the only way for us to come out of the mud, or as we say, the trenches… Unfortunately when we were raised in our communities we didn’t look at education as a tool that would lift us up out of the trenches.”

Morgaine Gooding-Silverwood and Aisha Elliott lead a discussion with experienced MDC educators about the challenges and goals for educators. The main goals include helping students to find intellectual joy and excitement in a difficult place, promoting self-respect and dignity, and discovering power in education. Other goals include developing skills in discussing, reading, essay writing, and note taking.

The challenges include how to create a classroom without hierarchy, and to encourage students to share in the education process. Students’ knowledge and their knowledge of self has been devalued in the space in which they have been forced to exist. That’s why in every class, there is a teacher plus an intern. Christia Mercer explains, “The professor is the brain, or as I like to say, the ‘brainy heart’, and the intern is the heart, or the ‘hearty brains’ so to speak.” The intern, or assistant, is responsible for helping with group work, as well as to be an emotional bridge between the instructor and the students. For example, as Morgaine Gooding-Silverwood notes, assistants ask questions when students might be too nervous to ask, and break down the barriers and walls to create trust in the classroom.

Other challenges include how to get professors to feel comfortable, confident, and to use their voices to engage with students and themselves on a human level. Gooding-Silverwood says, “It is very easy when you’re in an ivory tower to be all about your books and your writing and not about face to face interaction with people. In prison that is the entirety of what our classes are. We can’t bring in huge textbooks for people to look at. You can’t come and lecture for an hour because it’s not going to get through to people. You have to be able to have an interactive classroom discussion and dialogue.”

The day was interspersed with Theatre of the Oppressed exercises, including Image of a Word (where participants use their body to express a word) and a Slow Motion Race (where the last person to reach the finish line wins). We ended the day with mock classes and brainstormed about attaining our goals. After the workshop, the speakers and key participants went to Dinosaur BBQ for a debrief and working group dinner.

Next Steps
We are continuing our MDC program, teaching 4-week courses with 20 students in each course. In Spring 2019, we will host another working group meeting to review our progress and goals.