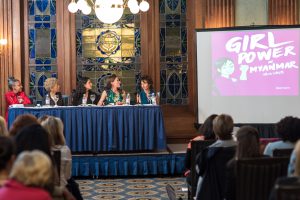 This September marked not only the ten year anniversary of the Center for the Study of Social Difference (CSSD) but, the five year anniversary of CSSD’s project Women Creating Change (WCC), one of two streams of research and galvanization that engages distinguished feminist scholars from diverse fields throughout Columbia University who focus on contemporary global problems affecting women and on the roles women play in addressing these problems.

The night began with introductory remarks by Columbia President Lee C. Bollinger, a steadfast supporter of CSSD and WCC and CSSD’s Director Marianne Hirsch. Ann Kaplan, Chair of the Women Creating Change Leadership Council (WCCLC), was honored for her ardent support of CSSD and WCC.

Echoed throughout the night were the stories of women, with the acknowledgment of the power of what speaker Aly Neel referred to as, hyperlocal stories, personal oral histories of women, (particularly subaltern women) and the work these narratives do to disrupt the norm. Neel also emphasized the necessity of activating the youth toward action with accessible stories, which served as the catalyst for her recent endeavor, Girl Power, a children’s book about pioneering women throughout Myanmar history.

Building off of the idea of hyperlocal stories, Nina Berman, documentary photographer and journalist, emphasized the importance of collaborative storytelling when telling stories around sexual violence and trauma. Traister, the author of the recently released book Good and Mad: The Revolutionary Power of Women’s Anger addressed both the costs and necessity of first person testimonies by women and the anger many women are feeling. Pulitzer Prize winning author and journalist Margo Jefferson’s delved into the power dynamics at play for women in telling their stories.

In the wake of Dr. Christine Blasey Ford’s testimony of sexual assault allegations against now Supreme Court justice Brett Kavanaugh, the roundtable served as a sort of catharsis for many in the room as both Hirsch and Bundles remarked in their comments. The conversation also converged around themes of female anger, solidarity and evoked the #MeToo movement and Anita Hill.

Currently the working groups sponsored by CSSD under the Women Creating Change idea-stream include Menstrual Health and Gender Justice, Geographies of Injustice: Gender and the City, On the Frontlines: Nursing Leadership in Pandemics, Religion and the Global Framing of Gender Violence (RGFGV), and Reframing Gendered Violence (RGV).

See photos from the event here.