An email after a visit to La Morada 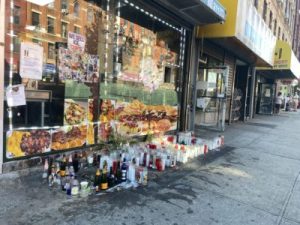 This post contains an email that I shared with Diana Taylor, Marianne Hirsch, and Lee Xie after visiting La Morada in the Bronx with Aya Labanieh on September 7th, 2021.

Dear all,
As I said in my previous email, the experience today was amazing and fulfilling. We spent many hours peeling beets and carrots and getting to talk with the members of La Morada. We made hand corrections on the date of the call and left a note next to the fliers saying that there were workshops available for kids. Unfortunately, families weren’t picking up veggies today. That will happen next Monday. I plan to go back there to volunteer a few more hours next week, and I can then distribute fliers to these families.

Photographer Camila Falquez, who did a project for El Pais (Spain) titled Queens of New York in which Natalia Mendez (main chef and organizer at La Morada) was included, came with us to volunteer. We had the chance to spend some time in the kitchen talking to Natalia and Marco, thanks to Camila, and also get a sense of the mutual aid work they undertake, how much work they do, and how vital it is for them to get people to help. We also went with Yajaira and Angeles to the community garden they started back in the spring. It’s an incredible space where they teach people to grow their own food and do workshops on medicinal plants for people in the neighborhood. The beauty and amount of work they do, which I got to know about while working at Hemi, is overwhelming. The level to which they take care and conversation made me wish that they could be taken as a model for public humanities, and I am absolutely serious about this.

Aya and I had a beautiful chance to talk and discuss the intended target for the workshops and thought that volunteers would be interested in applying and could also be the ones with time to apply and commit to attending workshops. We talked to Marco and Jacob (a regular volunteer) so that they can distribute the fliers among them as well as the regular families who come in search of mutual aid support.

At some point at the end of the afternoon, a basketball player (a famous one) showed up. He and his media team came to take a series of pictures for his social media. The pictures were supposed to show him doing some social justice/community work. Natalia was joking back in the kitchen about how these celebrities come over to “help” but end up making all the work more difficult and slow. That’s how it happened today, and as Natalia had predicted, the guy peeled a few potatoes, made a donation, and left. His media team, a bunch of white men, basically stopped the cooking process for almost 30 mins because, for them taking the picture was more important than the work that was taking place there.

That moment made me think of the Lorraine O’Grady retrospective organized by the Brooklyn Museum recently, in particular the piece “Art is…” which is one of my favorite works of art (obviously because it is a carnival-inspired work). Here is a summary of the work: Art is. A fascinating aspect of this work is that instead of creating more artworks, O’Grady finds a way of framing the people of Harlem themselves as works of art. I would be more than happy to share more reflections about this piece at a meeting and also some of her writing about it. But I wanted to bring this up because it seems to me like a great example of how documenting/registering what is already happening could be more powerful and “artistic” than coming as outsiders to execute a new project. While peeling beets with Aya, we got to talk briefly about Saidiya Hartman’s “The Anarchy of Colored Girls Assembled in a Riotous Manner,” so I would like to pull out a fragment from it as it has helped me to see the artistic and unseen potential of mutual aid efforts and somehow it also makes me think of O’Grady’s and the potential that the ZCMP holds:

“The mutual aid society survived the Middle Passage, and its origins might be traced to traditions of collectivity, which nourished in the stateless societies that preceded the breach of the Atlantic and perdured in its wake. This form of mutual assistance was remade in the hold of the slave ship, the plantation, and the ghetto. It made good the ideals of the collective, the ensemble, the always-more-than-one of existing in the world. The mutual aid society was a resource of black survival. The ongoing and open-ended creation of new conditions of existence and improvisation of life-enhancing and free association was a practice crafted in social clubs, tenements, taverns, dance halls, disorderly houses, and the streets.”

It seems to me that the re-emergence of mutual aid projects in NYC and around the globe during the current pandemic deserves attention. They might not work as memorials themselves, but, as Hartman points out, they constitute themselves a practice that we did not forget. And in not forgetting this collective practice resides a powerful potential for remembrance as these people have been in direct contact with those who lost jobs, family members, etc.

I’m attaching a few photographs of the community garden and some “memorials” I came across while walking around the neighborhood. The candle memorials, which are also very popular in Brooklyn and the LES, have always attracted me as they stand to serve many social functions in these communities when someone dies violently. They are placed in the spot where the person has been killed and are composed primarily of candles, spirits (liquors), food, cigars, coffee, photographs, and personal objects. I’m curious to know if someone has written about them. I’ll check out and let you know if I find something.

Sorry for my messy thoughts and writing. It’s late and I’m tired but excited for the opportunity you have created for us to do something meaningful. Thanks, Marianne and Diana!

Author Bio: Luis Rincon Alba is a Colombian artist and scholar based in New York City since 2010. He has taught at the departments of Art and Public Policy and Performance Studies at New York University’s Tisch School of the Arts. He is currently a doctoral candidate in the Performance Studies Department at New York University and a Public Humanities Fellow at Humanities NY and the Urban Democracy Lab. As an actor, performer, and oral narrator, he has collaborated with different artistic collectives in his home country and also in Brazil, Argentina, Mexico, the United States, and Italy. He is also the artistic director of the collective MUSA Presents.

The Zip Code Memory Project seeks to find community-based ways to memorialize the devastating losses resulting from the Coronavirus pandemic while also acknowledging its radically differential effects on Upper New York City neighborhoods. Through a series of art-based workshops, public events, social media platforms, and a final performance/exhibition at the Cathedral of St John the Divine, community members participate in building networks of shared responsibility and belonging.