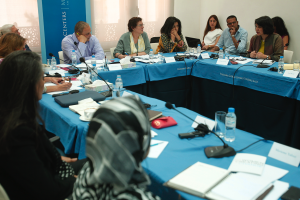 At first glance, 2014 does not seem like a banner year for women in the Middle East. We heard that ISIS, the Islamic State of Iraq and Syria, was requiring female circumcision around Mosul in Northern Iraq (a claim the group denied). A new law regarding domestic violence in Lebanon failed to criminalize marital rape, apparently thanks to conservative religious opposition.

The prevalence and persuasive power of these headlines about women in the Middle East was part of the reason I was so excited to attend a conference last May entitled, “Debating the “Woman Question” in the New Middle East: Women’s Rights, Citizenship, and Social Justice,” sponsored by the Women Creating Change Initiative at Columbia’s Center for the Study of Social Difference and held at the Columbia Global Center in Amman, Jordan.

The conference brought together scholars and practitioners from five Arab countries in addition to the US and UK. Given that my own doctoral work in Middle Eastern history has been inspired by time I spent working with a women’s rights organization in Syria, I was particularly eager to see what this combination of practical expertise and scholarly attention might produce. Coming from the US, where much of what I see and hear about “women in the Middle East” revolves around stereotypes, it was a privilege to join this group of experts as they reflected on some of the issues facing women and the study of women and gender in the Middle East in the complicated aftermath of the Arab uprisings.

Over the course of an intense weekend in Amman, these scholars and practitioners listened carefully to one another across political, strategic, and theoretical divides. They discussed, on the basis of their close knowledge of the histories and present circumstances of gender politics in particular countries, a set of big questions: How best can women fight for better lives and livelihoods under dire conditions, faced with the intransigence of state power, neoliberal restructuring, and colonial violence in both its historical and contemporary forms? How do discursive traditions or resources, like the languages of human rights, Islam, and shari’a law, enable and constrain women and those who advocate on their behalf?

One striking development is that a debate over the “woman question” itself emerged. How, many asked, does it serve us to pose questions and build alliances in terms of “women” and “men,” rather than in terms of class, race, sexuality, or one of the many other kinds of difference that divide human experience? For example, if thinking only in terms of “women” prevents middle-class feminists in Jordan from supporting the demands for a living wage articulated by working-class women as well as men, might it serve us to think more broadly in our scholarship as well as in our political work?

Focusing on women’s experiences, however, did open up an important conversation around the role of law in securing better lives for women. While many had successfully deployed legal strategies and means to further their political and feminist agendas (for example, taking on torture in Egyptian prisons or advocating for women’s concerns to be reflected in the text of the Egyptian Constitution), others were more critical of the law as a panacea. For example, a legal scholar from Palestine argued that, surprisingly, the transition from shari’a courts to civil courts, while presented as a victory for “women’s rights,” may have actually made it more difficult for women to access justice in the courts.

The conversation about the advantages and unexpected consequences of relying on legal strategies and the language of  “women’s rights” started out as a conversation about feminist strategy—when and under what circumstances to deploy the language and practice of the law. It became, however, a much larger conversation about the nature of political intervention. Who intervenes, on behalf of whom, and on what grounds? This question elicited a range of responses, but each was grounded in a particular set of political struggles and ethical commitments–making clear that while it is possible and indeed productive to talk about regional transformations, specific knowledges of embodied realities, political dynamics, and historical contexts are key to the questions which motivate and emerge from feminist scholarship and practice.

The workshop convinced me that it these specific knowledges and the conversations they enable that will allow us to move past the stereotypes which so often characterize—and hamper—our approach to the “woman question” in the Middle East.

For more information about the workshop and working group, please visit: http://socialdifference.columbia.edu/projects/gender-religion-and-law-muslim-societies