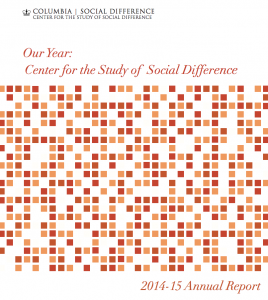 The Center for the Study of Social Difference recently released its annual report for 2014-15. The report announced the successful conclusion of The Future of Disabilities Studies project and the extension of Gender, Religion, and Law in Muslim Societies. Three new projects–Pacific Climate Circuits: Moving Beyond Science, Technology, Engineering, and Economics; The Legacy of Bandung Humanisms; and The Rural-Urban Interface: Gender and Poverty in Ghana and Kenya, Statistics and Stories–were established.

The report announces that alumni contributed over $200,000 in donations last year and the Digital Black Atlantic Project was awarded a National Endowment for the Humanities Digital Start-Up Grant for the creation of a digital publishing platform. The Center for the Study of Social Difference Fund, an inaugural quasi-endowment, was established to build ongoing support for CSSD and its projects.