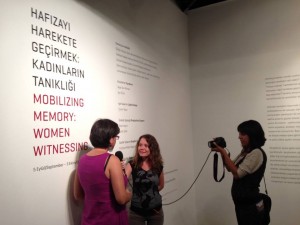 During the penultimate day of the week-long Women Mobilizing Memory workshop, a number of new research questions and concerns emerged, including the following: As women (and sometimes men) mobilizing memory, how do we deploy feminist scholarship, and what does feminism mean to each of us across our diverse cultural, linguistic, and educational contexts?

The working group panels for the day explored this question from a number of different angles. In a talk titled, “Coups d’État: Dialogues at the Intersection of Memory and Life Story in Chile and Turkey,” Marcial Godoy and Zeynep Gambetti staged their feminist methodology in the form of a collaborative dialogue. Their conversation reflected on the ways in which their separate trajectories as activist-scholars growing up in eras of gross political oppression have converged in a transnational, professional friendship built on solidarity.

The need for concrete collaboration between scholars as an explicitly feminist methodology has come up in discussions time and again. Andrea Crow and Alyssa Greene took a different approach to contending with the issue of collaboration in their own conversation on “Working Definitions: Activist Scholarship in a Transnational University.” Their dialogue asked us not only to strive to define our critical terms in order to improve our communication as feminist colleagues, but also to remain aware of our role in the university system at large, especially as university structures become more global and corporatized.

In many ways, the following panel on “Reversing Silences/Telling Forgotten Stories” made manifest many concrete, feminist issues in Turkey that had been in the background of many of the group’s explorations of Turkish politics earlier in the conference. Bürge Abiral gave a talk about sexual violence in women’s narratives of incarceration during Turkey’s military junta from 1980-1983. She provided important context for the difference regarding the “speakability” of sexual violence in Turkey, where rape was, until recently, defined as a crime against public morality and order, not against women’s bodily autonomy and human rights.

Dilara Çalışkan continued thinking about sexual violence specifically in transwomen’s communities and queer kinship structures in Istanbul, asking a provocative question based on Professor Hirsch’s scholarship: “Can we speak of queer postmemory?” She analyzed the ways in which trans mothers and daughters not only queer intergenerational transmission in their families of choice, but also hand down unfathomable memories of torture and forced displacement.

In the final talk of the day, Soledad Falabella shared her activist work on archiving and making accessible poetry from Mapuche women, an indigenous group that faces tremendous hostility on a daily basis in Chile. Falabella described the positionality of Mapuche women as “unbearable beings” for the state, always in conflict with the extent to which “the whole societal imaginary is trying to erase you,” and yet, in simply surviving, you become a concrete “standard of testimony” for the political problem more broadly.

Before separating into smaller breakout groups for the last time, the group participated in an impromptu discussion about positionalities as feminist scholars pursuing questions of social difference. Diana Taylor started the discussion by asking, “If we’re talking about gender, does our work automatically focus on women? Or are we using a feminist analysis to look at whatever we’re looking at?” A number of cross-cultural insights on feminism rose to the surface, including recognition of the potential that feminism has to provide an ethical lens for thinking about oppression, vulnerability, and a critique of power that does not lose sight of local contexts.

The final event of the day returned to the Black Box Theatre, where Maria Jose Contreras put on a one-woman piece of experimental performance art titled Prosthesis. Contreras’ performance embodied a tension that had been remarked upon throughout the day: the ethical imperative that the personal remain political in our work as feminists. Her performance juxtaposed televised images of incendiary political moments from her childhood in Chile with x-rays of her debilitated father’s internal organs and a working breast-pump, making a visually stunning commentary on the ways in which her milk as a new mother also carries with it residues of Chile’s past.