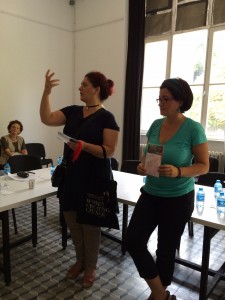 On Day Two of theWomen Mobilizing Memory workshop, Jean Howard introduced the following keywords for discussion: gender; embodiment; accompaniment (or “walking with”); politics; repair; mobilizing; hope; optimism; and play, or the recovery of joy. Ayşe Gül Altınay added feminism as a keyword and Milena Grass also expanded on Jean’s notion of accompaniment by stressing the idea of connection rather than comparison. Andrea Crow focused on the concept of connection as an important component of our work, pointing to our collective presence as evidence of the value of direct encounter.

Twin panels were also convened on Media, Memory, and Political Efficacy.  The panels explored a variety of themes, including: the personal archive; trauma and scholarship; the performative; and expanding notions of absence and representation. Taking as his point of departure photographs of his family and community, Leo Spitzer raised the possibility of a critical nostalgia among refugees. Milena Grass’ paper on Macarena Aguiló’s documentary work analyzed the legacy of Chilean leftist exiles and their descendants. Sibel Irzık’s paper picked up on the difficulties of sharing in trauma in the Turkish context of post-coup coup d’état novels, and the metafictional strategies that writers use to show language as a site of struggle against authority. In her work on the emergent aesthetics of disappearance, Nicole Gervasio proposed an expanded use of the term “forced disappearance” to include experiences such as political detention.

The second panel’s papers included a wider range of texts and explored a variety of affective possibilities. Embodiment as a critical term ran through the work all three panelists. Jean Howard discussed temporality and “slow violence” in the context of Carol Churchill’s theater, bringing together themes about the personal and the environmental as well as labor and bodily vulnerability. Henry Castillo’s work on the lumbalú, a customary dance of death in Colombia, was also discussed in the context of the gendered performance of lamentation, mourning, and sexuality. Rüstem Ertuğ Altınay added to the discussion by theorizing the intersections of the nationalist/political with the sexual.

Alyssa Greene is a graduate student in the Department of Germanic Languages at Columbia University.