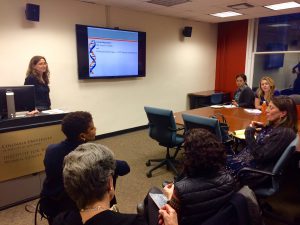 On January 22, 2018, the Precision Medicine: Ethics, Politics, and Culture CSSD/PM&S working group welcomed Dr. Susan Markens (CUNY-Lehman College) for its first talk of the semester, titled The Genomic Revolution, Genetic Counselors, and “Doing Ethics.” Dr. Markens presented her qualitative findings based on her research about the perspectives of genetic counselors towards the increasing availability and use of genetic science and testing.

Dr. Markens focuses on studying how the new advances in genetic science are translated and perceived, particularly from the point of view of genetic counselors. She presented the following questions during her talk: 1) What are the perspectives of genetic counselors on ethical issues emerging from recent advances in genetic technology? and 2) What do they consider to be their goals and professional responsibilities?

The talk presented data primarily derived from forty-two qualitative interviews, the vast majority of which were with board certified genetic counselors. Additional supporting materials drew from attendance at professional conferences, webinars, and talks, and also newspapers and other publications.

Genetic Counseling as a Profession

Historian Alexandra Minna Stern defined the birth and development of the genetic counseling profession as a “quiet revolution,” in particular starting after the establishment of the first degree in genetic counseling at Sarah Lawrence College in 1969 and later of a certification exam in 1981. By the end of 2017, the United States had a total of 37 accredited programs and over 4,000 certified genetic counselors.

Previously, genetic counselors primarily worked in prenatal counseling and pediatrics, and their role is now expanding to topics related to cancer and multiple overlapping areas. Cancer counseling has grown alongside the scientific advances in the last decades, becoming more and more popular in an industry setting. Genetic counselors play a pivotal role in terms of translating information for patients, having both a background in the sciences and other psychosocial aspects. “Non-directedness” is considered to be among the tenets of the profession, but not without controversy, given professional’s different existing approaches, fields of expertise, and perspectives. Nonetheless, patient autonomy always remains as the cardinal value.

In Dr. Markens’s interviews, many genetic counselors highlighted the uniqueness of their profession: one interviewee noted that “most other professions will recommend we just tell them what is available” alongside “benefits, limitations, and risks,” whereas genetic counselors describe themselves as providers of information, allowing patients to make decisions in an informed way. From a patient-centered perspective, their agenda consists in learning information about their patients, providing them information about genetic testing, and answering any questions that may arise.

Advances in and Impact of Genetic Testing and Knowledge: Views of Genetic Counselors

Overall, genetic counselors are enthusiastic about the advances in genetic science, calling it “positive,” “very exciting,” and “important.” In describing their motivation in pursuing their profession, one interviewee mentioned “empower patients to understand more about decisions” as one of their primary goals. At the same time, genetic counselors are aware of the complications introduced by such overwhelming “availability of information;” it is “frequently anxiety provoking,” leading to a “long line of testing,” “ambiguous results,” and “limited information.” As the stress behind “knowing the little things” accumulates, it “takes the fun out of pregnancy.”

Dr. Markens points to genetic counselors’ nuanced understanding of pros and cons as “reflective ambivalence.” Where is the line between giving the “right amount” of information, and “just too much?” In being part of the process, genetic counselors see both sides of the coin, mentioning episodes in which they regretted providing additional information in talking with their patients. “Maybe we are testing too much given what we know right now,” commented one interviewee.

Dr. Markens reports genetic counselors pointing to the need to have solid justifications prior to ordering tests. There is a tendency to “just go ahead and test,” and some interviewees observed that it feels they are just ordering tests without thinking about it. As results come back with incidental findings, genetic counselors find themselves wishing they had not ordered as many tests. Often, results are unclear: “that level of uncertainty for people can be jarring. And for me as a clinician, I don’t like it either,” since it’s “really hard to provide any level of reassurance to a patient.” All interviewees firmly confirmed that they are not “anti-testing,” but they expressed their efforts to grapple with the implications of their work.

The Role of Genetic Counselors in Private Industry

The impact of private industry upon the availability of testing for non-professionals has been of growing concern among genetic counselors. Specifically, there is a disparity between informed testing, with limited knowledge, and making informed choices for testing. The genetic counselors note that this ill-informed movement is driven by the industry’s push for testing among all consumers (“there is a lot of push to get it [genetic tests] out there”). This has led to the transformation of genetic testing as a “part of the routine care” instead of an option under circumstances where the results would be informative for medical decisions.

Dr. Markens highlights how this push from the genetic testing industry has not been unidirectional, but rather has been in response to a growing demand from lay consumers. This interplay between the growing industry and consumer demand has been expressed in interactions between consumers and genetic counselors. The counselors, limited in number, have been inundated with demands for testing, often without consult; as one counselor notes “people want to do all this genetic testing without genetic counseling, and they maybe don’t really know how it could impact them emotionally and financially.” Due to the limited number of genetic counselors available, questions regarding how to inform all potential consumers and how to educate providers have come up in these interviews. The disparity between the need for clinical genetic counselors and the demand, as noted by the interviewees, is made more substantial by the rising demand for the counselors in industry.

In attending professional conference and webinars targeted for genetic counselors, Dr. Markens presented her observations about how the private industry interacts with counselors in these settings. Unlike other social science conferences, Dr. Markens noted that the resources allocated for the professional conference where genetic counselors would be present were primarily funded by private industry. Additionally, she observed that the drivers of research in the area of genetic testing was often from private industry groups and funded by pharmaceutical and testing companies instead of academic researchers.

In bridging the lessons learned across these narratives, Dr. Markens presented her findings on how to manage the expectations of all those involved in the genetic testing process. There was a resounding agreement across interviews that there is a need to ground the field in the research and actuality of what we know and do not know. Building from the perspectives on the growth of knowledge about genetics and genetic testing, there is a real need to “manage our expectations of what the testing is going to give us.” This has been most notably impacting the process of informed consent, specifically, seeking to clarify what it is that the consumer would want to know about the process and potential outcomes. Dr. Markens highlighted a “need to change our focus from the definition of ethical principles in their abstract form to looking at their practical application,” such that the realities of testing are no longer a hypothetical scenario, but rather a reality that is present every day in the lives of genetic counselors.

At the close of Dr. Markens’s presentation, the audience, representing a diverse group of practitioners, scientists, and members of the larger academic community, was left with many thoughts and questions. In this discussion were encompassed questions about the future of the field and how those still in training can be a part of the movement to revitalize the core precepts of genetic counseling. There was a call for more diversity in the gender and race of genetic counselors and a clarity in the training provided to instill confidence in counselors to inform not only the consumer, but also others within the medical profession.

Some way in which these changes are currently being implemented involve genetic counselors being the ones to sign-off on the types of tests that can be requested as well as providing training and intervention to physicians to better inform them of the choices they have for requesting tests. In reflection, the overall tone and temperament of those in the room was of hope and a willingness to be creators of change in this field.