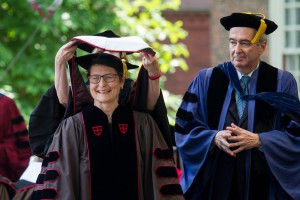 A teacher, scholar, and Shakespeare expert, Howard received her B.A. from Brown and served as a member of Brown’s Board of Trustees from 1974 to 1981, leading the Committee on the Status of Women, and was chair of the Advisory Council on Diversity. She currently chairs the Associate Council of the Pembroke Center for Teaching and Research on Women, also at Brown.