WOMEN MOBILIZING MEMORY: Patricia Ariza on Culture as a “form of resistance” 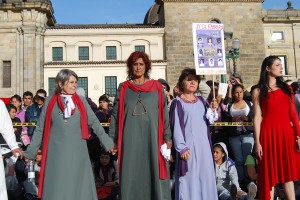 “Culture is a form of resistance,” asserted Colombian playwright, director, producer, and actor Patricia Ariza as she met with twelve members of the Center for the Study of Social Difference’s Women Mobilizing Memory working group at the Hemispheric Institute in New York City.

Ariza was recently in town to accept the 2014 Gilder/Coigney International Theatre Award from the League of Professional Theatre Women but she took time to discuss with the group her near fifty years of work employing theatre to promote social justice, particularly as it applies to Colombian politics, political violence, and women. Ariza is co-founder of the highly influential Teatro La Candelaria, Colombia’s first independent, experimental theater, and for the past 25 years has focused primarily on women and social justice, empowering traumatized citizens to express through public performance their experiences during the massive violent conflicts that have rocked Colombia for decades. These performances help transform pain into something socially constructive, she said.

Ariza showed a video of an encuentro, or action, she orchestrated in 2009 at Plaza de Bolívar in Bogotá where 300 women, mostly survivors of political violence and family members of deceased/disappeared victims, grieved and memorialized for a whole day the systematic assassinations of political leaders throughout the country. Civilian demonstrators joined by theatrical performers chanted “Dónde están?” (“Where are they?) as they carried photos of their missing and murdered relatives. Ritualistic choreography accompanied by fandango drummers and piano culminated in one dancer climbing atop the statue of patriarch Simon Bolívar. Participants stepped through life-sized silhouettes of the bodies of the victims as a song instructed the mourners, “If you want to sing, sing/If you want to cry, cry.” Many did just that.

Speaking through a translator, Ariza said that originally she did not intend to devote the last quarter-century to doing memory work with victims groups. “At first, I thought it was an act of generosity,” she said, “but then little by little it came to me that they provide a special, deep knowledge—a different way of doing political actions…and inhabiting public spaces.”

Ariza told the group that only recently have women been permitted to politically inhabit public spaces like town squares, which have historically been reserved for male-oriented political and military purposes.

“Art can help a lot,” said Ariza, who said cultural actions and celebrations are important sites of resistance against political oppression and violence. “It can get people to stop thinking war is the solution. You can’t do that through laws—only through culture,” she said.

With a slightly bowed head and limited eye contact, Ariza discussed another action that memorialized the government-approved murders of approximately 4,000 members of the left-wing U.P. (Patriotic Union) party in the 1980’s. In the action, 1,050 U.P. survivors stood at 1,000 candlelit tables in Plaza de Bolívar wearing the clothes of the deceased and placing their possessions on the tables. She said people came from all over Bogotá to see the performance, which was repeated for three years.

A spirited discussion ensued after Melody Brooks, co-chair of the Gilder/Coigney Award, inquired about the U.S. “Plan Colombia” that funds military missions against drug cartels and left-wing insurgents. Ariza said that the Colombian military has provided ersatz results by perpetrating approximately 4,000 murders of “false positives”—innocent citizens falsely characterized as drug traffickers or insurgents.

Ariza said that in an effort to aid Colombia’s compromised peace process, she hoped to plan an international peace summit of women in theatre in New York in April 2015.

Image of Patricia Ariza, center, at the Hemispheric Institute Encuentro in Bogotá, Colombia, 2009, by Cristhian Ávila.